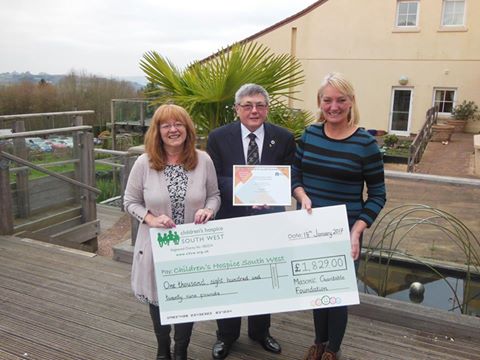 Provincial Grand Lodge of Devonshire
This year sees Freemasons celebrate their tercentenary and as part of their annual support of Hospices throughout the country, the Assistant Provincial Grand Master of Devonshire W. Bro. Charles Yelland presented a certificate denoting £1,829 given on behalf of the Masonic Charitable Foundation to Ann Juby and Paula Garrett from Children’s Hospice South West’s Little Bridge House hospice in North Devon.

The Masonic Charitable Foundation will this year give grants totalling £600,000 to two hundred and forty five hospices in England and Wales including nearly £14,000 to seven hospices in Devon as part of the £12 million given by them since 1984.

Freemasons have been long term supporters of Children’s Hospice South West and along with individual donations made by many of the 136 Lodges that meet throughout the county and the Masonic Charitable Foundation, together have donated nearly £95,000 to CHSW since it opened in 1995.

On receiving the certificate Ann Juby, Trusts and Grants Fundraiser for the hospice said: ‘Freemasons fundraising over the years for Children’s Hospice South West has been incredible, and we are extremely grateful for their support. It costs £3.4 million each year to run our Little Bridge House hospice, and these costs are met almost entirely by voluntary donations. Support such as this is vital to ensure that we can continue to make the most of short and precious lives well into the future.’

Little Bridge House is one of three Children’s Hospice South West hospices offering home from home care and support for families across the South West region. Each hospice offers respite, emergency and end of life care for local children who are not expected to live until adulthood, as well as support for the whole family including a dedicated sibling service.

The Assistant Provincial Grand Master W. Bro. Charles Yelland said when he presented the certificate “It is always very sad when a child is taken from us without them ever having had the chance to reach their potential, if in some way we as Freemasons can contribute to their care at this moment in their short lives, then we can continue to hope that one day a cure can be found. It was wonderful to meet some of the people today who give so much of their time and energy in caring for the children”.