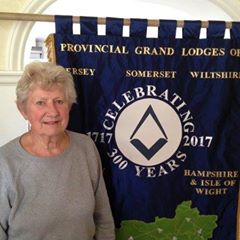 On Friday 1st July we travelled to North Molton to pick up the Banner made by Heather Everitt at Masonic Banners and took it to Mrs Wendy Watts.

The Banner will be dedicated by the Provincial Grand Chaplain at the PGL meeting in April 2017. Then as part of the Tercentenary Celebrations it will complete a journey through the 8 Provinces that form the South West Region, Jersey, Guernsey and Alderney, Hampshire and the IofW, Wiltshire, Dorset, Somerset, Devonshire and Cornwall.

The cost of the Banner was incurred by Mrs Watts in memory of WBro. John Watts of Lopes Lodge. The Banner accessories and pole case will be made by WBro. Alex Moody and a Banner case by WBro. Rem Lockton. 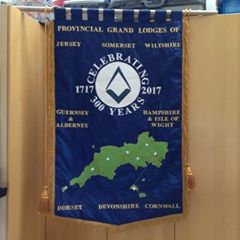