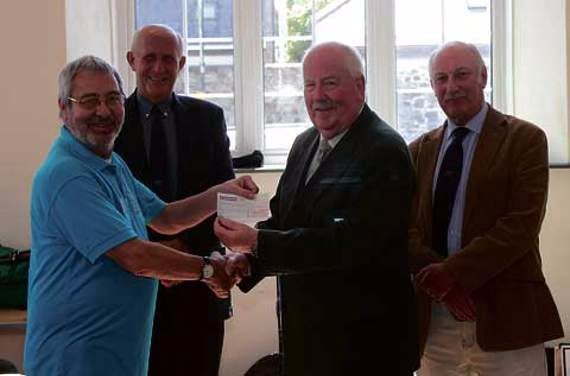 The members of Sir Bevil Granville Lodge of Mark Master Masons No 1231, which meets in Bude, nominated Bude Memory Café and were delighted that a grant of £250 was awarded.

On Friday, May 19 members of the lodge attended one of the fortnightly meetings of the Memory Café to present the cheque. The meetings take place at The Parkhouse Centre in Bude and are generally attended by about 30 people together with about 25 carers. The local Bude branch, which has been going for six years, has a committee of six who are assisted by ten volunteers.

The members of the lodge were welcomed by the chairman Mr Kim Tresidder who, between 1967 and 1978, worked at The Royal Masonic Hospital at Ravenscourt Park in London.

He gave an outline of the organisation and then invited the lodge members to join in with the singing, which they did with great gusto!

The Master of the lodge, Peter Lambourn, congratulated The Memory Café on its good work in the community and presented a cheque for £250 from the Cornwall Mark Foundation to the chairman.

He thanked the lodge for its support and said that the money would be extremely useful in helping the organisation continue its work.

The afternoon was not complete until all present had enjoyed cups of tea and slices of homemade cake!