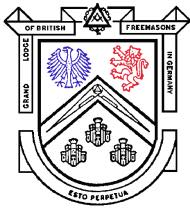 We are all proud to be German Masons and the GLBFG is part of the wider United Grand Lodges of Germany which has 4 other constituent Grand Lodges within it. Although we are German Masons, we are a truly International Grand Lodge and we have members from all four corners of the globe making up our ranks.

Currently, we have 17 Lodges within our Grand Lodge located all over Germany – from Hamburg in the North, Berlin in the East, Düsseldorf in the West and Munich in the South. Our main concentration of Lodges is North West Germany as a consequence of the British Forces presence in post-war Germany.

We are a small Grand Lodge within the world-wide freemasonry community and our coat of arms ties our Grand Lodge into this community .

The Seal of the Grand Land Lodge of the Freemasons Order comprising a Triangle and a Key are combined with the Triangle and Key together which also symbolise the Trowel. The Chain is displayed in three sections each exposing three links and thus symbolising the “Three times Three” common to German Freemasonry.

The THREE CASTLES are to remind us of the original Provincial Grand Lodge of British Freemasons in Germany.

The Masons of the VGLvD are committed to dignity, freedom and self-determination of people-centered traditions of their league. The organization claims to have approximately 470 lodges, all male, for a total of about 14,100 Masons (there is a separate Women’s Grand Lodge of Germany and the two grand lodges recognize the existence of each other, though they have no official ties).