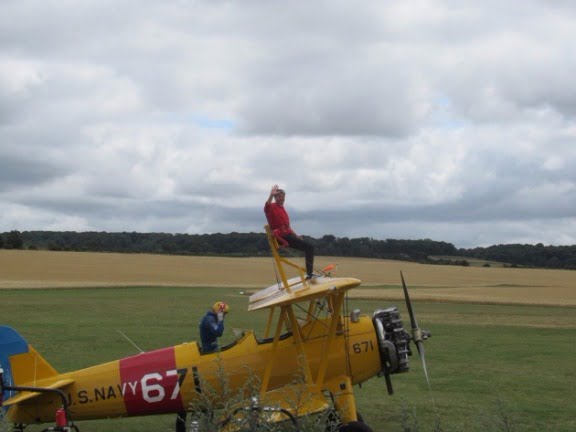 Alan Delaune from Burwell clearly has no fear of heights as he took to the skies strapped to the wings of a biplane for the wing walking challenge raising funds for two local charities, Arthur Rank Hospice Charity and Little Miracles.

Alan took on the wing walking challenge as part of his tenure as Masonic Lodge Master of Etheldreda Lodge 2107 in Newmarket.

This year the Freemasons celebrate their 300th anniversary and in keeping with their tradition of supporting local charities, Alan chose Arthur Rank Hospice Charity, Cambridgeshire’s only adult hospice, and Little Miracles, the children’s charity, to benefit from the £2100 raised from his challenge.

Alan Delaune from Burwell raised £2,100 for charity by wing walking.

Whilst Alan raised thousands of pounds, he also had to shed a few kilos in weights! Wing walking requires participants to be within a specific weight range in order to be able to take part and so as well as the day of the flight itself Alan’s challenge encompassed months of planning and preparation to slim down! On the day, as well as a fly-by at 50ft above the ground the biplane reaches speeds of 135mph: the effect of which was felt in full by Alan, harnessed above the pilot in the middle of the aeroplane’s wings.

“His nerves of steel were tested and he passed with flying colours. As a charity that relies heavily on community support to fund our services we are so grateful to Alan for not only taking on such a courageous feat but also raising such a great total for both us and Little Miracles.

“His YouTube video is well worth a watch but it isn’t for the faint-hearted!”

You can watch Alan’s exciting wing walking video and see photos of the feat at arhc.org.uk/challenges and to support his fundraising, visit http://uk.virginmoneygiving.com/AlanDelaune

To find out more about Freemasonry in Cambridgeshire you can visit their website at https://www.pglcambs.org.uk/