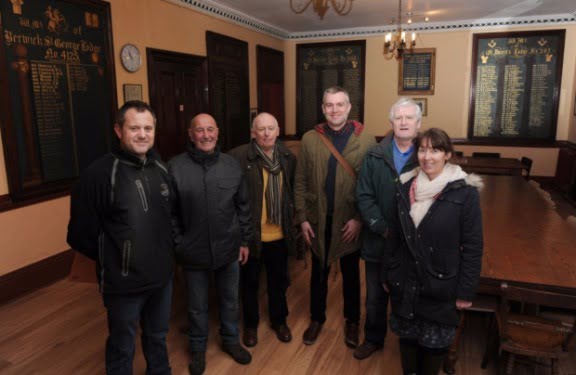 Freemasons keen to ensure their rich history lives on in Berwick

A bid to the Heritage Lottery Fund is being prepared to pave the way for the restoration of one of Berwick’s most fascinating but unknown buildings.

Built by St David’s Masonic Lodge in 1874, the purpose-built Victorian Masonic Hall, which is renowned for its interior splendour, is in need of urgent repair.

Steven Hughes, from the Heritage Lottery Fund, came to learn more about the project on Monday when he was given a tour by Steve Newman, of the hall management committee.

Steven said: “It’s at its early stages at the moment but it’s the kind of project that fits in with our priorities. It’s now about us supporting the application when it goes to our regional committee who make the ultimate decision.”

The stone repairs have been estimated at £116,000 but the building costs are likely to see the final restoration bill more than double that.

“As most people in the town are aware, the Masonic Hall was built in 1874 by St David’s Masonic Lodge for a cost of £1,300 and is still owned by them today,” said Steve.

“The Masonic Hall, however, is not well and to get it up to modern standards and renovate the stonework we need to find about £240,000.”

There are two other Masonic lodges and eight Masonic orders who also use the hall as St David’s tenants and each of these sends a representative to the hall management committee. It is this committee which is working to raise the funds for the preservation of the building for future generations to enjoy.

Although the hall will continue to serve its original purpose as a meeting place of Masonic Lodges and Orders, it will also be accessible much more to the general public, schools groups and charitable organisations for meetings and events.

Steve said: “It is true to say that there are many people who have never been inside the building, what is equally true is that most of them probably have connections to it but are unaware of this.

“We are constantly amazed by the amount of people who contact us with Masonic regalia or paperwork from relatives who were unknown masons that has been found in chests of drawers or the backs of wardrobes or in the attic.

“One of the reasons we are establishing the Masonic Heritage Centre is to pass on not just the physical heritage of the building, but also the nearly 400 years of Masonic history to be found in the town.”

The Lodge, on the corner of Church Street and Walkergate, has already had inquiries for annual general meetings, schools and from HospiceCare North Northumberland for a musical charity evening concert.

“The young people of Berwick should, we feel, be made aware of this amazing treasure trove of history which is why we will be organising guided tours and activities days for schools with worksheets and power point presentations in the future,” said Steve.

“How many people, for example, know that 80 of our Brethren served in the First World War and one of them, who was raised in Spittal, won the Victoria Cross?

He added: “The hall management committee would hope to work closely with the regimental museum to help encourage the links between us and discover our joint heritage by regular open days in the hall where people in the town can come and search our records.

“We also will be working with the town archives in the same way and cannot thank them enough for all the help they give us. We know there is a need for this as we did this on last Open Doors Day and had 250 people through the door coming to ask about their ancestors.

“It is encouraging the support we are getting from bodies such as the town council and Berwick Time Lines and we are in the process of contacting bodies such as schools, the history society and the Berwick Civic Society for their input and suggestions into what we are doing.

“Freemasonry is changing fast with two of the lodges who meet in the hall, St David’s and Heart of Glendale, now having their own websites and Twitter accounts and a quick search on Google will bring these up. Membership of younger men is now increasing as a result of this policy throughout the country.

The fundamental aim of charity towards the community is not forgotten however. Our Daughter Lodge Berwick St George and the Royal Arch Chapter, for example, recently presented Berwick Cancer Cars with a cheque for their funds.

“It is through these and other methods that we hope to preserve the special history of Berwick’s Freemasonry for future generations and hopefully for the next 400 years.”

It is envisaged the dining rooms will serve as the centre of the heritage hub being created. It will act as a classroom during school visits and as a meeting place for clubs and societies.

It will also act as a gathering point before concerts and a training centre for a team of volunteers to assist with archives and research.

The Temple will act as a venue for concerts and events, both individually for charities and as part of festivals such as the Berwick Literary Festival, and continue to be open to the public on Heritage Open Days.

To allow access to the Temple for the elderly and the disabled, both for guided tours and events, a stairlift will be fitted and the toilets renovated and updated.

The complete aims and plans of the hall management committee can be found on www.stdavids393.org.uk