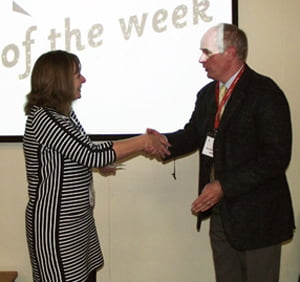 First principal of Fleetwood Chapter No 3711 Robert Thompson and his colleague Bob Boal went back to school, but not for what might be described by some in the chapter as much needed further education, but with a pleasant duty to perform; that of making a gift to the school.

Their school run was to Red Marsh School in Thornton Cleveleys, which looks after handicapped children. Their visit has become somewhat of an annual event as the school is one of the favourite good causes the chapter has chosen to support. The school cares for some 82 pupils aged between two and 19, all of whom have learning difficulties of varying degrees.

Robert and Bob were welcomed by head teacher Catherine Dellow who took her visitors on a tour of the school and thoroughly impressed them by showing off some of the work her pupils have achieved.

As it was ‘golden hour’ just before home-time, classes were relaxing after a hard day’s work and the visitors were cheerfully greeted.

An Ofsted report ranks Red Marsh as a very happy school where staff and pupils feel valued, respected and exceptionally well supported to give of their best. As a result the pupils’ achievements are outstanding.

At a packed assembly, Robert and Bob soon picked up some of the basics of ‘signing’ and joined in with gusto as children received awards for outstanding achievements during the week.

Robert received a rousing cheer as he handed over a cheque for £100 to Catherine who asked him to give Red Marsh School’s thanks to Fleetwood Chapter. The gift is to be used to purchase a polytunnel which was on the pupil’s wish list and which will be used by the children to grow vegetables in the school garden.