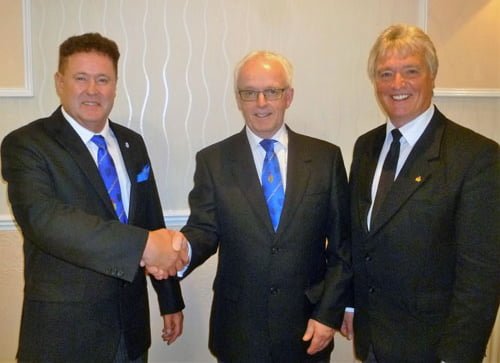 In 1998 the master of Semper Sursum Lodge No.5622 was Peter Schofield and the masters of Hindpool Lodge No 1225 were Keran Stalker and Derek Forrest. Both lodges meet at Barrow-in-Furness Masonic Hall. During that time, the three of them became firm friends as they visited lodges and attended social events together. That friendship continues to the present day.

Pictured from left to right, are: Peter Schofield, Derek Forrest and Keran Stalker.

Since then Peter has become Chairman of Furness and South Lakeland Group. It was therefore very appropriate, and a great personal pleasure for the trio, that Peter was selected to represent the Provincial Grand Master at Hindpool Lodge’s installation meeting when Keran once again installed Derek into the WM’s chair of the lodge.

The fore-shortened ceremony of the installation of a former holder of that post did not prevent it being one conducted with great dignity and accuracy. Director of ceremonies Doug Smith had obviously worked his charges hard in the lead up to the meeting and on the day he oversaw proceedings in his own assuming manner.

Lodge secretary Tony Cassells, not being content with undertaking the immense amount of administrative duties associated with such an occasion, also delivered the working tools of an installed master and gave the address to the new master.

The presentations and explanations of the working tools were impeccably carried out by Paul Musgrave, Stuart Anderson and Steve Renney with Stuart earning great plaudits for a superb delivery of the long version of those of the second degree.

To mark the occasion Derek presented Peter with a cheque for the West Lancashire Freemasons’ Charity made out for £1,225 – reflecting the lodge number. Peter thanked the lodge members for their generosity.

Following the formalities of the lodge room, 100 diners attended the installation banquet in the Fairfield Suite. Included in their number were group vice chairman Gary Rogerson and secretary Barry Hadley.

As well as those topics that a representative is obliged to mention, Peter also drew on his memories to look back to 1998 when Derek, Peter and himself, along with the other masters, had enjoyed a wonderful time.

He thanked Keran for the way in which he had represented the lodge during his second term of office when he had proved to be an enthusiastic attender of lodges throughout the group and an ever-present figure at the various social functions. He had been as keen, dutiful and attentive to his duties as he had been in his first time round.

Derek also reminisced and pointed out that he had placed copies of the dining list from his previous installation around the room. He also produced his menu card which, on checking, had been signed by all but two of those detailed on the dining list. Both being present on this occasion it was a cause of great merriment when he identified them.

Looking back even further, Derek produced the menu from when his paternal great grandfather John Postlethwaite had been installed as master of the lodge in 1924. Much of the detail was the same as at present but there were a couple of additional courses on the menu and eight of the toasts on the list were to be accompanied by songs, the last being to the ‘musical brethren’.

Tucked away in the menu was a cutting from the local newspaper which gave a report on the installation and listed all of the officers appointed and some of the dignitaries present including Walter Fairbairn, the Mayor of the town. The article concluded with the paragraph: “The usual Masonic toasts were duly honoured at the banquet which followed, while a splendid musical programme was rendered.”

The number of toasts may have been cut down and the songs not sung but 2016 proved a very successful meeting with a banquet thoroughly enjoyed by all in attendance and a good time was had by all. They may have had as good a time in 1924 and 1998 but it is hard to envisage them having had a better one as the brethren did on the evening when Derek ascended to the chair for a second time.