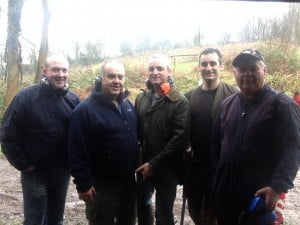 The day started with bacon rolls and coffee at the local Greggs store at 9am before heading up tree tops. We were met by Andrew Groombridge and the his team and once signed in headed down to the first stand. It started rain on the first few stands but this didn’t dampen the spirits and we made the most of a few covered stands. The first fifty clays soon flew by and by the halfway stage Martin Price had the lead but due to family commitments had to leave it there. Another 50 clays were soon dispatched and by the end of the 9th stand Kevin Phillips had the lead. Despite good shooting all round and a good first time outing by David Kevin managed to keep the lead, finishing the morning with the highest score, but only by 2 shots to Simon.
Back at the Tree Tops Lodge Paul Burley handed a bottle of wine to Kevin as winner of the first MMCSA shoot. Well done Kevin and to all those who too part. 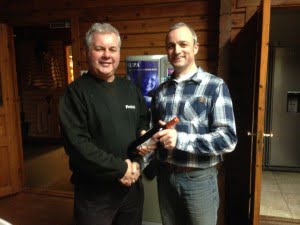 The next shoot will be held a Keepers Lodge on the 7th February and will start at 9:45. This will be a friendly shoot with members of the Bristol Masonic Shooting Association popping over the bridge to join us. The cost of the event is £20.00 for 50 clays, a bacon roll and hot drink on arrival and hot drink at the end of the days shoot. It is open to members and non members, licensed guns and beginners alike.
If you wish to join the sociable company of this group and find out what we are all about.
Please contact
W. Bro. Paul Burley
Secretary MMCSA
M: 07816193456