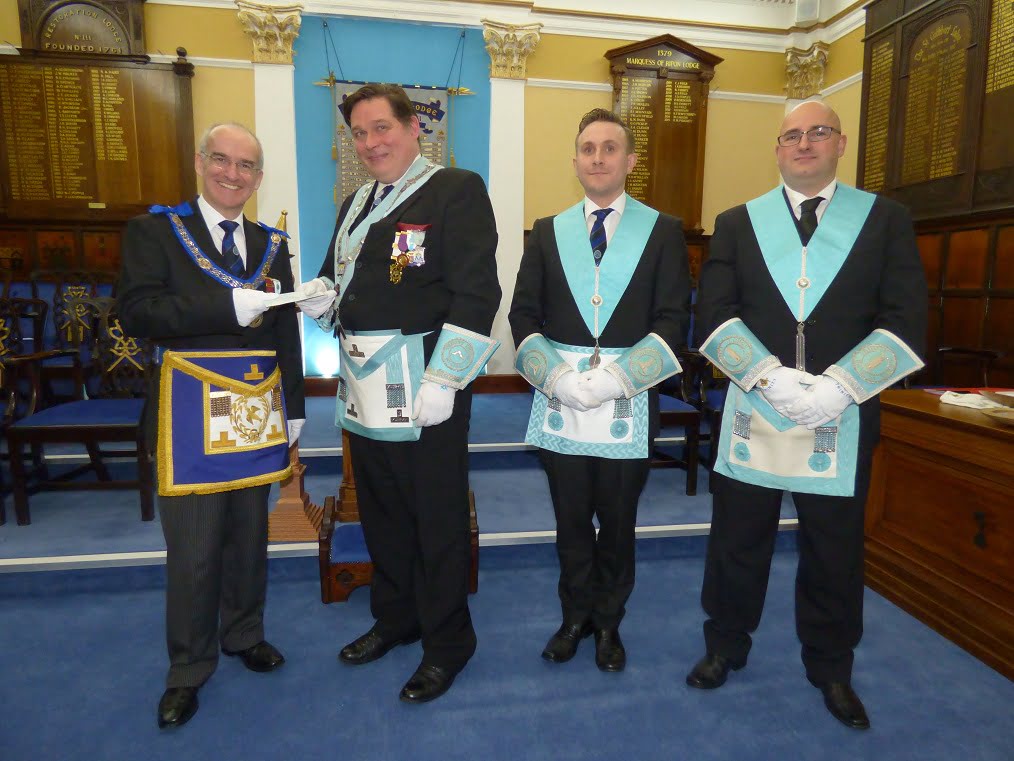 Early evening on Wednesday 26th of October brethren started to gather for the annual installation of the Master Elect at Trinity Lodge 4751, who meet in Darlington.  The representative of the Provincial Grand Master for the evening was the Assistant Provincial Grand Master, Simon Craig Steele.  Craig was warmly welcomed into the lodge by Worshipful Brother Tony Petch, the installing master, who was ready to hand over his collar after a very busy and successful year in office.

The installation of the Master Elect, Worshipful Brother Nigel O’Brien-Bird, was soon under way after he was presented by his father, Tony Bird.  The ceremony was a well executed throughout the meeting and a testament, not only to the effort put in by the brethren involved, but in particular to the hard work in planning and guiding by the Director of Ceremonies, Bob “Captain Birdseye” Allen.

At the end of the meeting during the second rising the newly installed master presented a “heavy cheque” to the Assistant Provincial Grand Master, on behalf of the brethren of Trinity, for £2,500 towards the 2021 festival.  Craig sincerely thanked the brethren for their generosity and advised that this now takes the lodge to achieve the silver award towards the lodge festival target.  Craig gave particular thanks to Worshipful Brother Simon Atkinson, the lodge Charity Steward, for his hard work and effort.

At the close of the meeting upstairs the brethren then enjoyed a delicious meal at the festive board and celebrated the newly installed master and officers for the ensuing year.  Towards the end of the festive board Craig responded to his toast and said that his first and foremost duty was to convey the congratulations to Nigel, in taking the chair of the lodge for the second time, on behalf of the Provincial Grand Master, Norman Eric Heaviside.  Craig once again thanked the lodge for the donation towards the festival and made reference to the lodge living up to their name; Faith, Hope and Charity being at the heart of it.  Craig gave the brethren some dates for their diaries which included the carol service at Durham Cathedral on the 19th of December and also Saturday 24th of June 2017 where all of the masonic halls within the Province will open their doors to the public to celebrate 300 years of freemasonry.  Craig asked all of the brethren to give some thought as to what they would like to do on this date.

Before Craig sat down he referred to the grand sum of £800 that Trinity Lodge had raised at the Raby Gala and their interesting lodge stall of “chicken chucking”.  Craig was aware of some of the grand throws by eager customers trying to win; some long and some high.  This then led to how he was aware that Trinity’s very own Visiting Grand Officer, the Past Provincial Grand Director of Ceremonies Andrew Foster, was the only person who was able to make a superb throw in the opposite direction!  Craig then presented Andrew with a trophy and memento of his remarkable achievement which was one of the chickens that had been chucked on the day.  Andrew received his award with good humour and even posed for a photograph.  Andrew’s wife will no doubt have to make a space in their lounge to display Andrew’s new trophy.

Craig paid tribute to the amount of master masons within Trinity lodge, including those who took office on the evening, and wished the lodge members every success for the future ahead.  The “icing on the cake” for the evening was the delightful rendition of the master’s song which was sung by Worshipful Brother Tom Whitfield.  Something that Nigel will remember for years to come…