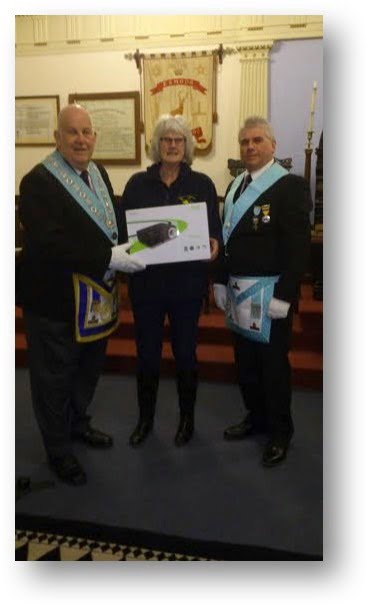 Exmoor Lodge Help To Project The Local Air Ambulance’s Cause

Further to the news item published on these pages in December 2015, where Exmoor Lodge 2390 published the details of their charitable giving for the year………

That presentation meeting saw a Lodge cheque for £500 handed to Mrs Gail Everett in support of the Dorset and Somerset Air Ambulance (DSAA). Her work for their charity was discussed at length during that evening, whereupon it became clear that her role would be more effective if she had some up-to-date presentation equipment.

The new Master of the Lodge, W.Bro Garry Holman made the necessary arrangements for the Lodge to fund the provision of a new projector for Gail’s use. It was soon purchased with the full support of the brethren and W. Bro Garry was very pleased to be able to hand the new digital projector to Gail prior to the Lodge’s recent March meeting.