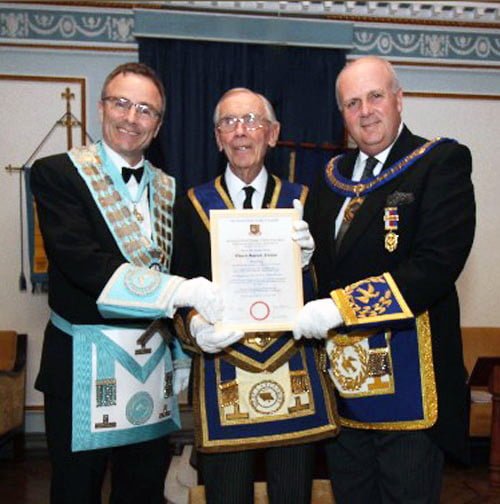 It was noted with pleasure that several members from the Lodge of Valour No 4322 had travelled from Leigh to attend a 60th anniversary meeting for Edward Aspinall Foulkes, (affectionately known as Eddie), held at Semper Fidelis Lodge No 4428, where many other Masons from the Fylde coast came along to support and witness this fine occasion.

The officers of Semper Fidelis Lodge attended to the usual business, which included dealing with accounts and correspondence before receiving Provincial Deputy Grand Director of Ceremonies Mark Barton. Mark announced the presence of Assistant Provincial Grand Master David Winder, who processed into the lodge accompanied by Past Assistant Provincial Grand Masters Rev Harry Callaghan and Steven Reid, along with the Chairman of South Fylde Group Ian Ward. They were supported by four acting Provincial grand officers and other distinguished brethren. Past Assistant Grand Director of Ceremonies Keith Jackson added harmony to the procession by his skill at playing the organ.

The master of the lodge David Lucas offered the gavel to David Winder, which was accepted and the Assistant Provincial Grand Master assumed control of the lodge. After salutations from the brethren, David Winder introduced the main business of the meeting which was to honour Eddie’s 60 years in Freemasonry. He assured all present that he felt it was always a privilege to preside over a 60th anniversary meeting.

David gave a feel for what was happening in 1956, the year of Eddie’s initiation. It was the year that spies Burgess and Maclean resurfaced in the Soviet Union after being missing for five years. Elvis recorded Heartbreak Hotel and Doris Day sang Que sera, sera. Grace Kelly married Prince Rainier of Monaco and Jim Laker took 19 wickets against Australia in the fourth test at Old Trafford. He then asked for Eddie to be placed in the centre of the lodge.

Eddie was christened Edward Aspinall Foulkes on 5 October 1926. His father Robert worked for the distribution company Lancashire United and his mother Margaret was, at that time, the sub-postmistress in Leigh Post Office.

At Leigh Parish Church Primary School, Eddie made his mark in the running team, of which he was captain. He was considered so vital to the success of the team that for one competition his head mistress talked his mum into sending him on a train home from holiday so that he could take part. After being put up for the night in the head’s home, he led the team to victory the following day and was then promptly returned by train to Colwyn Bay to resume his holiday.

Having passed a scholarship, Eddie attended Leigh Grammar School where his favoured subjects were chemistry, physics, mathematics and learning to speak German. He also continued his love of running, which aided his fielding skills while playing in the second team at cricket.

On leaving school at 16 he briefly worked as a trainee accountant at Lancashire Associated Collieries before being conscripted into the 6th Battalion Duke of Wellington Regiment at Colchester. This began a successful military career in which he was fast-tracked into officer training, having been head-hunted due to his superior communications skills. He was then posted to the 10th Battalion Cameronians, an elite rifle regiment. He was eventually promoted and posted to India because of his organisational and financial skills. He remained in India until he was demobbed in 1948, following which he joined the Territorial Army, becoming a Senior Battery Commander of 253 Field Regiment, with the rank of Major. Eddie received the Territorial Decoration in 1963. 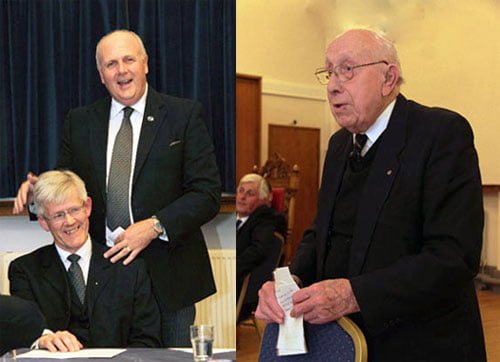 Returning to civilian life, Eddie briefly returned to Lancashire Associated Collieries, but then moved onto Combined English Mills where, after three years secretarial training, he steadily rose over the years to the very high position of Company Secretary of Coats Viyella, the largest textile group in the world at that time; a position he held until his retirement in 1987. Eddie has remained a keen sportsman throughout his life. Following on from athletics and cricket, he has played and refereed at football and excelled at golf, during which time he has captained Westhoughton and Porters Park Golf Clubs and is currently a member of Royal Lytham Golf Club.

In his early years, up to the age of 29, he was a chorister and later became a keen gardener with a penchant for growing and exhibiting daffodils. In 1990 Eddie purchased his beloved whippet ‘Willie’ who was shown at Crufts in 1991 and 1992.

The year 1948 was a busy year for Eddie, as it was during that year that he met his wife Jean. They have had two sons; Robert who now runs his own narrow boat company and John who sadly passed away. Eddie and Jean are also blessed with three grandchildren.

Eddie was initiated into Freemasonry on 9 April 1956, passed on 4 May 1956 and raised on 14 January 1957. He worked his way through all the offices and was installed as master in 1968. Between 1963 and 1965 he was heavily involved in the opening of Leigh Masonic Hall, subsequently becoming the first company secretary. He was also one of the first directors of the hall. Eddie has worked tirelessly for his lodges and chapter, holding many senior offices. He is particularly noted for writing the lodge history for the 75th anniversary of the Lodge of Valour in 1977.

In 1970 he was awarded the very high office of Provincial Deputy Grand Registrar and in the Royal Arch he holds the rank of Past Provincial Grand Standard Bearer. He also has the distinction of having celebrated 50 years service in both Craft and chapter.

During the recital of Eddie’s life and achievements, David Winder called upon Len Speakman, secretary of the Lodge of Valour, to read a précis of the minutes from the meeting during which Eddie was initiated.

The banquet that followed was a predictably happy way to close a fine event. In his toast to the Assistant Provincial Grand Master, Ian Ward told of how David works tirelessly adding that his work continues during recess. However, he urged David to enjoy most of the summer and come back refreshed with batteries recharged.  In his reply David said that it was an honour and delight to have joined brethren of Semper Fidelis Lodge and members of Lodge of Valour to celebrate Eddie’s special night. He led a happy birthday song for Ian Ward and thanked his supporting acting Provincial grand officers Mark Barton, Godfrey Hirst, Brian Ogden and Bill Hembrow. David finished by presenting Eddie with his copy of ‘This is your life.’

Frank Rothwell of Lodge of Valour proposed the toast to Eddie’s health, during which he spoke warmly of their early days. He praised Eddie for the important and successful work in setting up the Leigh Masonic Hall, as well as his history of the lodge. In his response, Eddie thanked everyone responsible for the very enjoyable evening, with particularly kind words for Rev Godfrey Hirst, saying that he had lost none of his poetry as a chaplain. He concluded his reply by presenting a cheque for £200 which was made out to the lodge charity account. The evening was closed by Tony Smith who delivered the tyler’s toast.