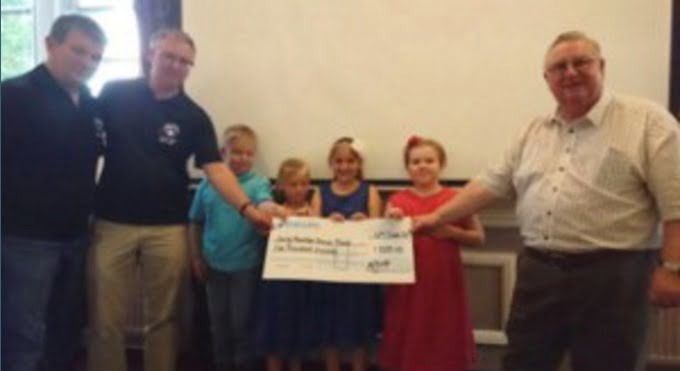 At his Installation on October 19th 2015 WBro John Young PPGReg, WM explained that during his year as Master he wanted raise funds for Derby Mountain Rescue Team and Guide Dogs (Derby) being involved with both charities as John and his wife Janet were both Puppy Walkers for Guide Dogs for five years and John is a member of the Derby Mountain Rescue Team’s Supporters Group and their youngest son, Mark is a Section Leader within the Team.

At every Lodge meeting there has been a raffle for the two charities and John even had a Raffle at the Ecclesburne RA Chapter’s Installation meeting in April.

At the Sunday Luncheon on June 12th 2016 held at the Grange Banqueting Suite, Littleover, Derby, there were 72 attendees. As some members of the Lodge and some Masters of other Lodges could not attend due to a clash of events, they sent donations to be added to the total raised to date.

On that day the raffle plus the donations and the fact that a most generous member of Ecclesburne Lodge № 2425 paid the wine bill for the afternoon, around a staggering £800.00 was raised towards the two charities.

After a fine meal and lots of relaxed chatter Derby Mountain Rescue Team and Guide Dogs (Derby) both gave a presentation giving an insight to the work both charities do to help people in the wider community, it is not possible to enlarge on this here.

After the presentations and many questions from those gathered the WM John Young presented the representatives of each charity with a cheque for £1,000.00. It should be noted that even though the Lodge has raised over £2,000.00 there were still two meetings to go before the Installation meeting in October 2016 which of course means another two raffles one of which was at the Ecclesburne Lodge № 2425 Curry Night on June 20th 2016.

John and Janet Young would like to thank WBro Neil Bowman for the Ladies Song, WBro Chris Hall for acting as Master of Ceremonies, WBro Andy Mann and his wife Jill for all their help with all sorts of things and Bro Carl Reynolds, SW for being Johns wing man and transport manager on over 45 visits to other Loges all over the Province of Derbyshire and of course to all those most generous people (you know who you are) who gave so selflesly to our two charities.