I’m sure, like me you have been horrified at the recent attack in Lahore in a children’s playground, when a deranged person detonated a suicide belt in the midst of children, and their parents, relaxing and enjoying their Easter break. Some seventy Adults and Children died in a maelstrom of explosives and ball bearings Sadly, it is an all too frequent event, in that the innocent suffer at the hands of the extremist, and there is so little that any of us can do to help.

Logo of The Emerald Isle Lodge No XIX. 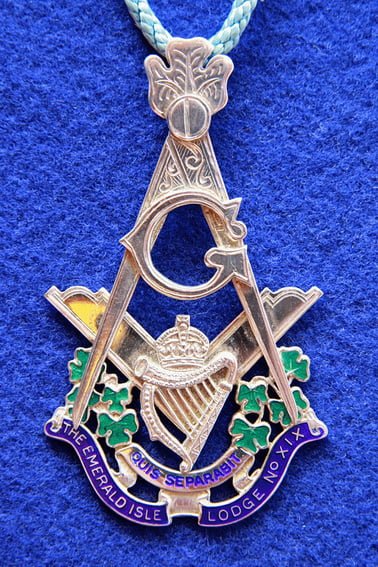 Past Master’s Jewel of The Emeralde Isle Lodge No XIX.

In 1993, the Government of Pakistan issued an edict banning Freemasonry within the boundaries of its country. A number of Lodges were forced to close and their Warrants were returned to Ireland, Scotland and England. When Warrant No 19 returned to Ireland, our Most Wor Grand Master, Most Wor Brother, Most Hon, The Marquess of Donegal encouraged Brethren in the Metropolitan Area to rally round and keep the Warrant alive, until such time as circumstances will eventually change in Pakistan. This has been done and Emerald Isle Lodge No (XIX) I.C. has continued to grow from strength to strength.

As part of the outreach carried out by The Emerald Isle Lodge, they have been actively supporting the work carried out by The Aziz Jehan Begum Trust for the Blind. This work has been very successful allowing children who are visually impaired to learn braille and the Trust successfully persuaded the Pakistan Government to allow pupils to sit their national certificate exams in braille, thus giving these children the opportunity to use their individual gifts to the full. With a high record of academic results, the Trust makes every effort to get students admitted to the best colleges for further education.