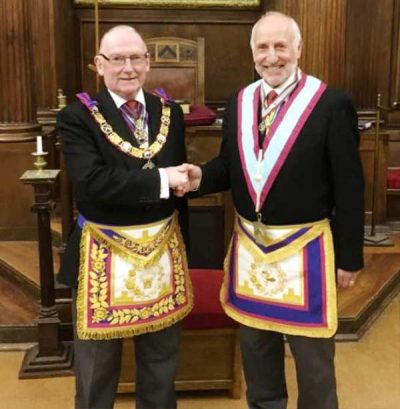 Tuesday night on the 25th October saw the Installation of WBro Ed Barton as Worshipful Master of 990 at Manchester Hall. Over 70 Brethren attended the meeting including the PGM RWBro Alex Sillars McLaren, his Deputy WBro John Hartley Smith together with his 2 APGMs WBros Tony Davies and Gerry Young. The Installation was carried out by WBro Fraser McCord in his usual marvelous manner and it gave me particular pleasure to see WBro John Edmund Barton installed in the Chair of this prestigious Lodge.

Why ? Well I’ve known Ed now for 17 years as Secretary of my own Lodge, Union 171 in Uppermill. He’s one of this Degrees unsung heroes having been Secretary not only of 171 for all the time I’ve known him, but also several other large Lodges. He’s also a bit of a local hero in the villages of Saddleworth, being known for not only his exploits in his younger years as a professional Rugby player but also as a teacher for many years at Saddleworth School. It never ceases to amaze me how many people know him and I’ve never heard a bad word said against him. A thoroughly nice guy and worthy occupant of the 990 Chair of Adoniram !