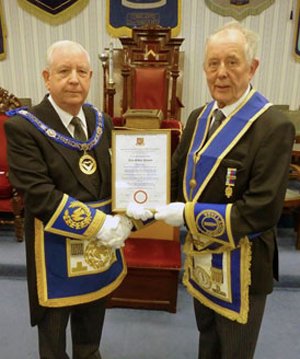 The members of South Shore Lodge No 4672 were delighted to honour Dudley Newiss as he celebrated 50 years in Freemasonry. The ceremony was presided over by Assistant Provincial Grand Master Harry Cox. As is the custom, Dudley was placed directly in front of Harry.

Harry Cox (left) presents Dudley Newiss with his certificate for 50 years in Freemasonry.

John Dudley Newiss, affectionately known as Dudley, was born on 22 November 1941 at home in Kent Ave, Droylsden, near Manchester to John and Lily Newiss.

He began his education at the Abbey Hey Primary School, passing the 11 plus and attending Burnage Grammar School and on moving to Salwick, he attended Blackpool Grammar School. At sixth form he studied French, German and religious instruction and afterwards joined his parents in running the Hand and Dagger Hotel until 1977.

On 29 May 1977 he married Susan at Blackpool Registry Office and moved into a new home at Lytham and started work along with Susan at the Land Registry.

Dudley was initiated into Meliora Sequamur Lodge No 7483 which was then meeting at the Imperial Hotel, Blackpool. He was passed on 3 May 1966 and raised on 3 January 1967. He was installed as master in 1975 and had a very busy year, carrying out two initiations, two passings and the opening parts of two raisings.

He installed his successor Robbie Reed in 1976 and became assistant secretary in 1977, was appointed lodge secretary in 1978, an office he held for 12 years, before returning in 1996 for a further year as WM. He also carried out the office of assistant director of ceremonies for two years in 1991-3. He was appointed Past Provincial Senior Grand Deacon in 1983 and promoted to Past Provincial Junior Grand Warden in 1993.

Dudley was exalted into Clifton Chapter No 703 on 20 October 1977 and installed as its first principal on 18 February 1988, later serving as the assistant director of ceremonies and director of ceremonies. He was appointed in Provincial Grand Chapter to the rank of Past Provincial Assistant Grand Sojourner in 1995 and promoted to Past Provincial Grand Sword Bearer in 2002. He is also a member of a number of Masonic side degrees.

Towards the end of the presentation, Dudley’s certificate in recognition of 50 years in Freemasonry was read by the North Fylde Group Chairman Duncan Smith and presented to Dudley by Harry Cox. The brethren showed their appreciation in the traditional way. At the festive board that followed, more praise was bestowed upon Dudley.