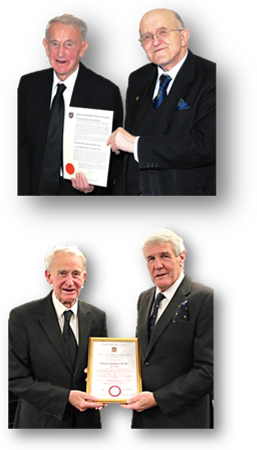 Eight members of The Old Ellesmerian Lodge (5368) travelled to Sale in November to support W Bro ‘Ted’ Archer upon his receiving his 60-year Certificate in Craft Freemasonry in his Mother Lodge, The Lodge of Unity No 4390.

The evening was solely set aside for this event and graced by the presence of Deputy Provincial Grand Master VW Bro Alan Glazier PGSwdB, assisted by AGM Martin Barlow PSGD and PAProvGM Peter Owen PSGD.

A week later Excellent Companion ‘Ted’ Archer, a member of The Chapter of Unity and Perseverance No 580, received his 50-year certificate in The Royal Arch from Paul Renton Assistant to the Provincial Grand Principles.