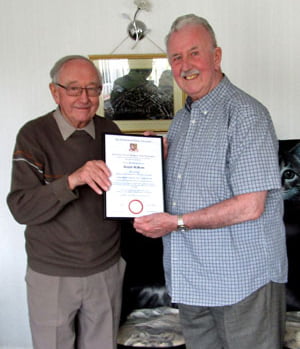 A small deputation of brethren from Fermor Hesketh Lodge No 1350 was delighted to be able to visit Donnie McBride for a presentation to celebrate his 50 years in Freemasonry. The visit was arranged for noon at Donnie and Beryl’s home in Ormskirk. Donnie has not enjoyed the best of health for some time, so much so that he has been unable to visit his lodge for over a year.

Derek Finney led the deputation on behalf of the members and everyone was warmly welcomed into Donnie’s house, even the dog wanted to make a fuss of the guests.

Donnie served for eight years in the Merchant Navy travelling the world on many different ships. He had visited some far flung places and had interesting stories to tell of his exploits. Once ashore he quickly found work with British Telecom, retiring at the age of 65. Donnie and his wife Beryl have recently celebrated their 52nd wedding anniversary. Some of their family live nearby and Donnie and Beryl are blessed with grandchildren and a great grandchild. 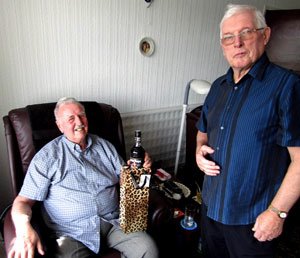 Donnie McBride being presented with his bottle of rum by Kenny Meath.

Donnie joined the lodge 50 years ago in March 1966. He should have received his certificate in March to mark his 50 years in Freemasonry; but he simply was not able to get to the meeting.

It was now the chance for Fermor Hesketh Lodge almoner Kenny Meath to make a presentation on behalf of the brethren. Kenny had done his research well, as Donnie is fond of the sailor’s favourite tipple and Kenny presented Donnie with a bottle of dark rum. 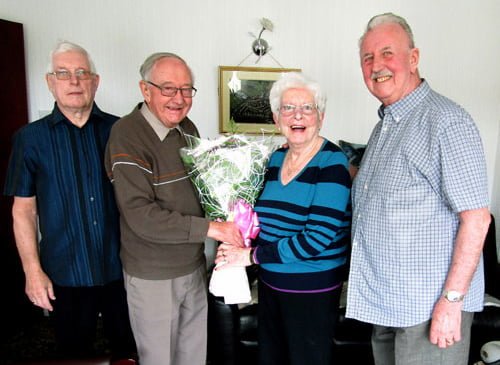 Derek felt he needed to make comment of the sterling work that Donnie had carried out over the years for both the lodge and Masonry in general and that his presence in the lodge is sorely missed.

When the presentation was completed an unexpected buffet lunch had been prepared for the deputation by Beryl and her daughter, it was more than the small deputation were able to do justice to. Whilst eating everyone continued to catch up, talking about members past, who had been characters in their own right. Many names from the past were banded about even a trip to Inverness spawned fond memories. In appreciation Beryl was delighted to receive a bouquet of flowers from the lodge members.

Time passes so quickly especially when amongst friends and it was soon time to say goodbye. The brethren wished Donnie and Beryl all the best for the future and took their leave, after having arranged another visit during the summer.