Having celebrated 50 years in the Craft, grand officer Don Laurie repeated the exercise, this time in respect of his membership of the Royal Arch. The members of Holy Royal Architect Chapter No 314 and visitors were treated to an excellent resume of Don’s life both in and out of Freemasonry.

The PrDGDC Neil MacSymons entered the chapter and formally announced the presence of the principal guest of the evening, Ian Cuerden. Ian was duly escorted into the chapter to be welcomed by the first principal, Robert Irwin. Robert smilingly concluded his welcome with an invitation for Ian to occupy the first principal’s chair which he duly accepted.

After seating himself in a comfortable manner, Ian began the proceedings by saying how pleased he was to be able to play a part in honouring such a distinguished and respected companion as the evening’s celebrant, Donald Lansbury Laurie. He asked that Don be seated in a central place in the chapter and set the scene by recounting some of the events of 1934, the year of Don’s birth. Events such as the opening of the Mersey Tunnel, the creation of ‘Flash Gordon’ and a year when tennis maestro Fred Perry was winning all before him. After a sojourn to the Wirral, the Laurie’s moved to be near to the family business of Priest and Laurie in Bootle which was established in 1823. Ian informed the companions, that coincidentally is was the same year as the Masonic Liverpool rebellion and the founding of the Grand Lodge of Wigan.

Turning to education, Ian remarked that Don was obviously academically inclined as a pupil of Merchant Taylors School in Crosby, a school that enjoys a continuing enviable reputation. Not only was Don proficient in mathematics but his talents extended to the liberal art of music when he became a chorister at Christ Church Bootle in 1941, continuing until 1948. It was a time when the ravages of war took its toll on the adjacent docks with 70% of the houses in the area suffering bomb damage. Fortunately, the Luftwaffe being unable to locate the Laurie house, it escaped unscathed. Ian commented that, at the time, his own mother-in-law lived not too far from Christ Church, where possibly her stalwart presence may have seen Hitler off. He also mentioned that Don’s father was involved in fighting the many fires that resulted from the bombing, an activity that saw many good men killed in their efforts to quell the flames.

Ian continued, turning his words to the post war period when Don achieved pleasing success in playing at Orrell Tennis Club for 11 years. He mentioned the need for gainful employment rearing its ugly head and Don being articled at Glass and Edwards, a renowned city firm of Chartered Accountants, where he subsequently qualified. It was a time when professionals hurried like ants round the streets of Liverpool in bowler hats with the mandatory rolled umbrella. Many firms worked Saturday mornings when male staff were allowed to wear sports jackets along with the obligatory tie. Liverpool being a thriving port had many shipping companies operating from the docks along with the necessary insurance companies and even a branch of the Bank of England. In terms of business, Ian thought this must have been a veritable accountant’s paradise on earth. It was a paradise interrupted by national service as Don served his two years in the RAF before returning to professional life.

Turning to romance, Ian moved on to that day, 1 February 1958, when Don was married to Olive, his lifelong and continuing soul mate. The marriage was blessed with two children, Susan and Andrew with Susan leading a busy life teaching in America and Andrew travelling far and wide in pursuit of his chosen career.

Ian remarked that although the celebration is about Don’s golden jubilee in the Royal Arch it is only right and proper that the indissoluble link between the Craft and the Royal Arch is recognised by first referring to Don’s Craft experiences. He continued by informing the companions that Don was initiated into Calderstones Lodge No 5479 in October 1956, an event that was especially memorable as it was his own father who worked the ceremony, this being his first ceremony following his installation as WM. His father also had the pleasure of passing, raising and finally installing Don in the chair of the lodge in 1968. Don went on to join his old school lodge, Old Crosbeian Lodge No 4992 in 1972, becoming its master in 2000, then serving as lodge treasurer for some 18 years and also as the 1981 RMBI Festival Representative.

Continuing with his career in the Craft, Ian informed the companions that the Lodge of Peace and Unity No 314 welcomed Don as a joining member in 1995 where his accounting skills were put to good use by serving as an appointed auditor from 1997 to date and group representative from 2006 also to date. His Craft involvement also included membership of the Blackburn based Blakewater Lodge of Installed Masters No 9574 that inflamed his passions with the prospect of ‘missionary work’ in East Lancashire.

His success and accounting skills in West Lancashire can be measured by the fact that he was appointed Provincial Grand Treasurer in 1997 and later as an auditor. Extensive work on the management board of the Victoria Fund of Benevolence and on the Provincial Grand Ball committee saw Don appointed to grand rank as PAGDC in 1982 and further promoted to PJGD in 1998. Ian concluded his report on Don’s Craft participation with a brief mention of his membership of the Provincial Grand Officers’ Luncheon Club and the Provincial Grand Lodge Pension Fund. 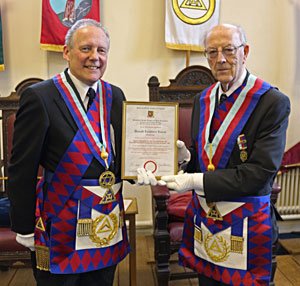 Turning to the Royal Arch, Ian mentioned Don’s exaltation into the Chapter of Tranquillity No 3877 in 1966, arriving at the first principal’s chair in 1971. He went on to serve as scribe Ezra, continuing a family tradition by taking over from his father before, after eight years in post, handing the position to his brother Ray in 1982. During this period, his accountancy skills were again recognised by his appointment as the Provincial Grand Treasurer in the Royal Arch in 1980, a position he held for three years. In acknowledgement of Don’s commitment to the Royal Arch, Ian was pleased to say, that in 1985, Don was appointed to the grand rank of PGStB and promoted to the high rank of PAGSoj in 1997.

Continuing with Don’s career in the Royal Arch, Ian moved on to Don’s 1996 joining membership of Holy Royal Architect Chapter, saying the chapter was looking for an auditor and Don’s arrival in the fold solved the problem. He observed that Don’s auditing skills continue to be tested by successive chapter treasurers to the present day.

Continuing his remarks, Ian said that he had always found Don a reserved yet discerning companion, a person who has not been a Freemason merely for the badge but has given total commitment and continuing kindness to others, a person whose modesty was an example to all. He suggested that the strength in Freemasonry lies in the many and varied accomplishments of its talented members and in this respect, Don had used and continues to use, his talents to the benefit of all.

Ian concluded by bringing the very best wishes and personal congratulations of the Grand Superintendent Tony Harrison on the occasion of this celebration. Due to other Masonic commitments he was unable to be present in person but did request that Ian thanked Don for the considerable effort he has made in the Province in the advancement of the cause of Freemasonry.

Before presenting Don with his celebration certificate duly signed by the Grand Superintendent and the Provincial Grand Scribe Ezra, Ian invited the Geoff Saul to read the certificate for the benefit of all those present.

Later in the evening at the celebration banquet, the first principal Robert Irwin presented Don with a copy of the minutes of the 1966 meeting at which he was exalted and also a cheque from the chapter members by way of thanks for his contribution to the Royal Arch and Holy Royal Architect Chapter in particular.