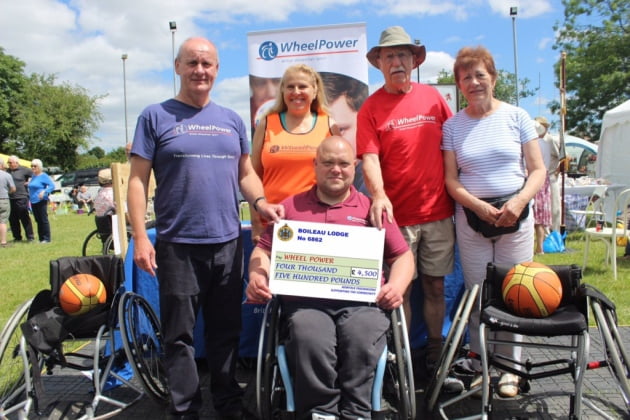 A charity which helps people with disabilities take part in sport has received a £4,500 donation from a group of Norfolk Freemasons.

Members of the Wroxham-based Boileau Lodge have completed a triathlon to raise funds for Wheelpower, which offers opportunities for disabled people to get active.

Freemasonry is celebrating its 300th anniversary in 2017, with a series of sporting challenges. Robin Rush cycled 300km in Norfolk to mark 300 years; while Steve Kemp ran 20.17km, and Michelle Kemp completed a 3km swim, one for every century.

Chris Rattenbury, an ambassador for WheelPower said: “I was delighted to receive the cheque and meet those who have made this very generous donation possible.

“The money will go towards a second Primary Sports Camp to be held in Norfolk.

Mr Rush, who is 76 years old but still very active, said: “There are so many youngsters with disabilities wanting to join in with activities, so this has been my charity focus in our Tercentenary year”.

Mr Kemp, who is also a keen sportsman added: “I have been involved with WheelPower helping to organise events and have seen how much support is given to help people with disabilities participate in sport.

“Robin and I have experienced so much pleasure from sport, we want to help others do the same”.