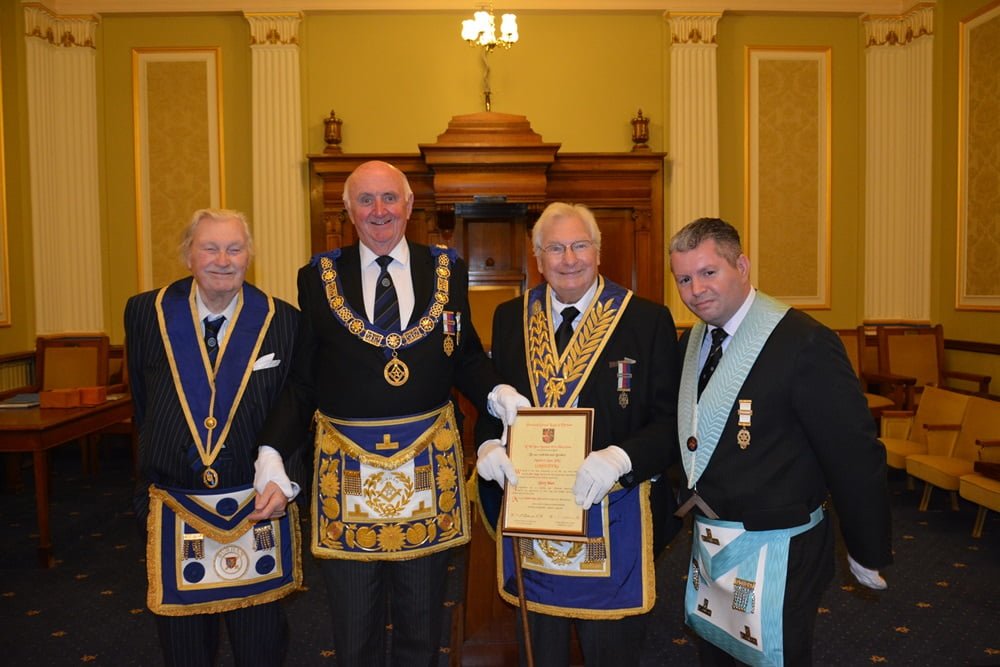 Tuesday 13th September was the hottest day of the year so far, with a temperature in Kent recorded at a balmy 34c (hotter than Mexico City!).  It also saw the Provincial Grand Master, Norman Eric Heaviside, along with a Deputation of his Officers, pay a full team visit to St John’s Lodge in Burdon Road, Sunderland, to Celebrate Matthew Lynn Jolly’s 60 years in Freemasonry.

St. John’s Lodge No. 80 is one of the oldest Lodges in the Province, if not the country for that matter.  It was formerly No.94 under the Grand Lodge of the “Antients” with a Warrant dated 21st October 1761.  The Lodge celebrated its 200th Anniversary on 14th January 2006.

After being warmly welcomed into the Lodge room on a sweltering evening, Craig Brown the Lodge DC, gave an explanation of The First Tracing Board which everyone present agreed was one of the finest pieces of work you are likely to have the pleasure to see.  The talk was informative, instructive and something that certainly gave everyone some advancement in Masonic knowledge.

Eric then had the very pleasurable task of presenting Lynn Jolly with a 60 year Certificate.  Lynn was initiated on 11th September 1956, becoming Master of the Lodge in 1966.  After excellent service in the Craft and Chapter he became Visiting Grand Lodge Officer of both Fenwick Lodge and Stallinger Lodge, which was a daylight Lodge in Queen Street (sadly no longer in existence).  Lynn joined Wear Lecture Lodge in 1974 and became its Master in 1993, likewise joining Achates Lodge in 1994 and becoming its Master in 2009.

Walking and music have been great hobbies in Lynn’s life and, after his wife sadly died 21 years ago, Masonry became his passion; indeed something that he has enjoyed and something he has put a great deal into over the 60 years of continuous service he has happily dedicated to it.

The certificate citation was read out by Tom Gittins in his capacity as Provincial Grand Secretary and then presented to Lynn by Eric, with the brethren present showing their respect and adulation for a truly well respected St John’s Brother.

At the festive board brethren from as far afield as Leicestershire and Rutland as well as across the water in Northumberland celebrated with Lynn and his brother Ken his magnificent 60 years in Freemasonry, with the brethren of St John’s Lodge presenting Lynn with a cake to celebrate his diamond anniversary in Masonry.