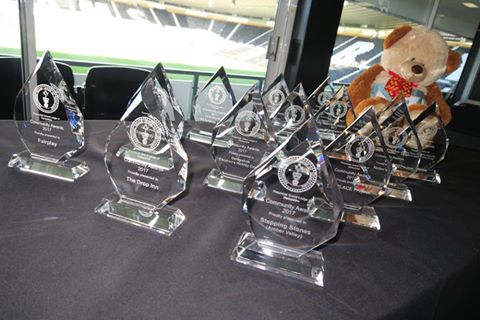 To celebrate the Tercentenary of English Freemasonry a special event held at Pride Park Stadium in Derby saw the Freemasons of Derbyshire make awards to fourteen charities in the County.

The awards totalled £25,000 Two hundred people were present at the awards ceremony including HM Lord Lieutenant for Derbyshire, Mr William Tucker, the High Sheriff, Mrs Annie Hall, the Deputy Grand Master of the United Grand Lodge of England, RW Bro. Jonathan Spence and the Provincial Grand Master for Derbyshire, RW Bro. Steven Varley, together with civic leaders, charity workers and senior Freemasons from across the county.

These were community awards and the recipients were nominated by Derbyshire Masonic Lodges and selected by local authorities and Derbyshire Freemasons.

In addition in honour of HM Lord Lieutenant and the High Sheriff, further awards were given to their Charities: Foundation Derbyshire and Marie Curie.

The awards recognise the good work these Charities do for local people and the impact this work has on the community.