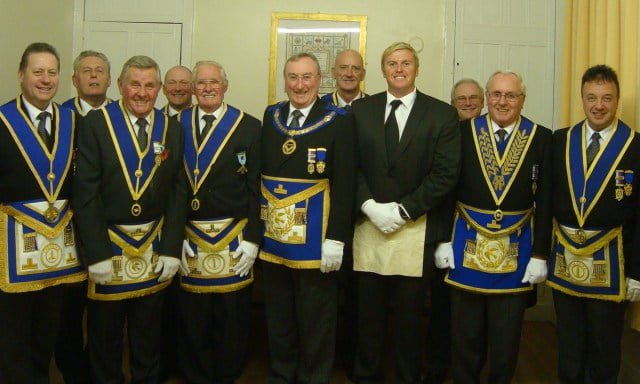 The Owen family, members and guests of St. Oswald’s Lodge meeting at Victoria Hall in the heart of Malpas turned out in force to support their member Dennis Sidney Owen when he celebrated his Golden Anniversary on 2 November.

Dennis who is now in his late 80’s has in his time been a head herdsman, milking parlour technician, builder and today continues to ride his bicycle, grow all his own vegetables, play football with his grandson and take a lead role in singing in his local church.

George Mann APGM detailed his interesting past and even part of his life unknown to his blood brother. The Owen family have set their roots in St. Oswald’s Lodge when grandson James Sadowski was Initiated in April this year. The evening was well supported by Acting Provincial Officers who enjoyed their first taste of real Country Freemasonry in Cheshire’s most southerly Lodge.