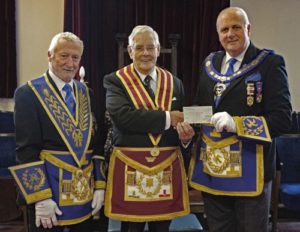 The Masonic Order of Athelstan, Northumbria Province, which now covers the United Grand Lodge of England Provinces of Northumberland, Cumberland and Westmorland and the Province of West Lancashire made a delightful donation to the West Lancashire 2021 Festival in aid of the Masonic Charitable Foundation.

David and Geoff receive the cheque from Robert

They were very keen to give their help and support to the Province of West Lancashire as it embarks upon its 2021 Festival.

Robert Dickinson, the Provincial Treasurer of the order, was delighted to make the donation of £500 on behalf of the Provincial Grand Master of the order David Railson. The presentation was made at Preston Masonic Hall where David Winder, the Vice President of the Festival and Geoff Saul, the Festival Secretary, were present to receive the donation.

Following the presentation, on behalf of Tony Harrison, the Provincial Grand Master for the Province of West Lancashire and Festival President, David thanked Bob for the donation. He asked him to also convey his thanks to David Railson and the brethren of the Masonic Order of Athelstan for their generosity and kindness. In expressing his thanks, David included the gratitude of those brethren who will ultimately benefit from the donation.