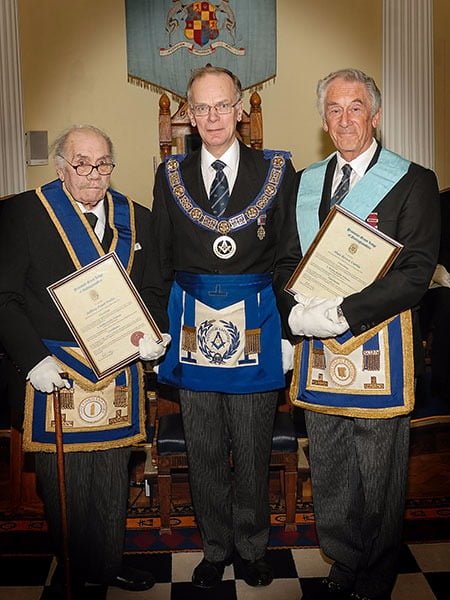 To honour the occasion, the Provincial Grand Master, R.W. Brother R.K. Wilson, attended the January meeting of the Lodge to present framed certificates commemorating their achievements.

W. Brother Alan Curtis (PPrGReg) was Initiated into Horus Lodge No.3155 at Great Queen Street on 22nd November 1961. He was Raised to the rank of Master Mason in 1962. After various movements around the UK, he finally resided in Nottinghamshire, and joined De Vere Lodge No. 1794 in November 1985. In De Vere Lodge he held all the working offices from Steward to Senior Warden, and was W.M. in 1994/5. He has continued to work for the Lodge in various capacities as Asst. Secretary, ADC, DC for five years, and is currently the Lodge Chaplain.

W. Bro. Peter Wells (PPrJGW) was Initiated into De Vere Lodge No 1794 at Goldsmith Street on 15th December 1961; he was Raised on 18th Dec 1964 and became W.M. in 1973. He was appointed PPrGStd B in 1980, and promoted to his current rank in 2007. Brother Peter is PGStdB In Mark Master Masons, and a PM of Shelford Priory Lodge No.818, and the founding Master of The Arthur Morley Custance Lodge of Installed Mark Masters No. 1808.