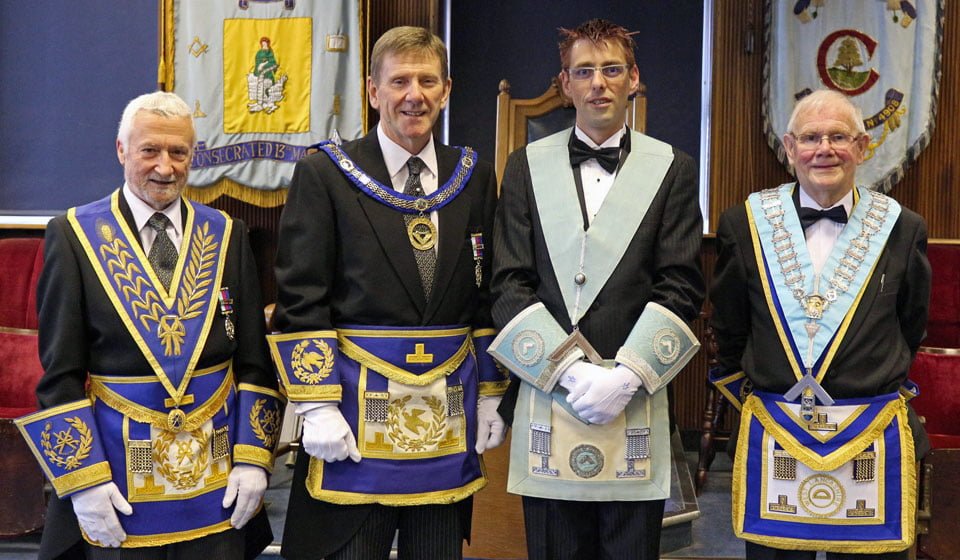 At the installation meeting of Ingol Lodge of St Margaret No 5844, the WM David Seed retired from office for the fourth time in his Masonic career. The event was witnessed by Assistant Provincial Grand Master Mark Dimelow as the principal guest, accompanied by grand officer and group vice chairman Geoff Saul. 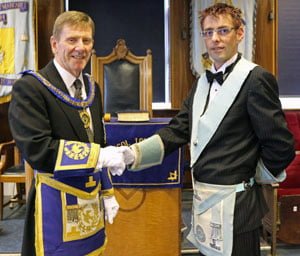 After transacting the regular administrative business of the lodge, it was raised to the third degree to receive the principal guest and grand and Provincial grand officers. Following their entry, the WM had the pleasure of welcoming Mark and thanking him for his attendance. Mark, in return, thanked David for his welcome wishing him well for what he was sure would be an excellent ceremony.

Salutations were duly given and acknowledged before the next item of business was declared. David, as the installing master, announced the item was to install master Mason, Kevin Walton, as his successor into the chair of King Solomon. Kevin was duly presented for installation by Gowan O’Hagan with David informing him of his duties as master. He went on to install Kevin into the chair of the lodge in a full ceremony performed in a first rate manner that no doubt benefited from this being the fourth time he had installed a successor coupled with the excellent work of Gowan O’Hagan in his role as the lodge DC. It was a ceremony that was greatly appreciated by all the visitors.

In the course of the ceremony the working tools of the third, second and first degrees were presented in an equally commendable manner by Andrew Colosimo, Tristan Thorpe and Stuart Flynn respectively. The address to the worshipful master was given by Gowan. Ellis Wilkinson (Snr) was appointed senior warden and informed of his duties by Bob Cadman. Ellis Wilkinson (Jnr) was appointed junior warden and informed of his duties by Geoff Saul. The address to both wardens was given by David Seed. Stuart Flynn was installed as the junior deacon, this being his first time in that position and he was addressed by Joe Welsby. The ceremony concluded with the address to the brethren of the lodge given by the principal guest, Mark Dimelow. 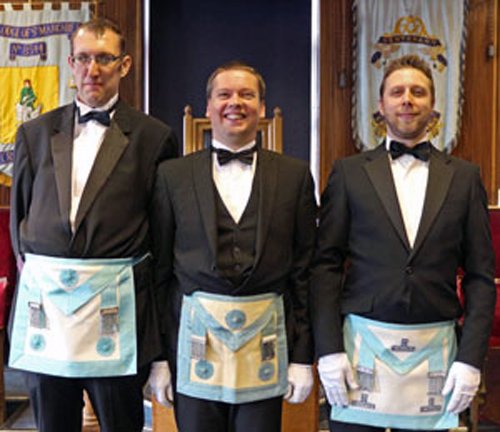 The working tools team, from left to right, are: Stuart Flynn, Tristan Thorpe and Andrew Colosimo.

Mark then had the pleasure of bringing the congratulations and good wishes of the Provincial Grand Master Tony Harrison, commenting on the excellent manner in which the WM had been installed into the chair by his predecessor. He congratulated Kevin on attaining the chair, wishing him well for his term of office and the work of all the brethren who had a part to play in what had been a first class ceremony.

The meeting concluded with Geoff Saul presenting the Syd Lucas commemorative jewel to David Seed as the outgoing master by way of thanks for all the work he had done in support of the lodge during his year in office. The late Syd was a member of the lodge held in high esteem with great affection by all the members and everyone within Masonry who got to know him.

Later in the evening, in response to the toast to the grand officers, Mark said he had earlier brought the greetings and best wishes of the Provincial Grand Master, now wished to bring his own congratulations. He congratulated the lodge members on what had been a first class and enjoyable ceremony. In particular, he mentioned the work of David Seed as the installing master, commenting that he had appeared to have done most of the work until the point when Gowan was reappointed as the lodge DC. He also mentioned the commendable work of Andrew Colosimo, Tristan Thorpe and Stuart Flynn in their presentation of the working tools.

Mark continued by informing the brethren that the Provincial Grand Master had now completed two successful years in office and reminded everyone that his instructions are, as always, for everyone to enjoy their Masonry by gaining satisfaction from what they do. He mentioned the introduction of the new care structure led by the Provincial Grand Almoner Ernie Greenhalgh saying: “We should all be on the lookout for brethren who need help.”

Turning to the evening, he commented that he sensed a feeling of wellbeing in the lodge and reminded the brethren that large numbers of members is not essential and that the enemy of a successful lodge is complacency. On behalf of the ultimate recipients, he went on to thank the lodge for the generous charitable donations made earlier. He prompted brethren regarding the need to care for their Masonic halls and never to forget the Masonic charities.

He went on to remind the brethren that, whilst the forthcoming festival would divert significant charitable donations in the direction of the Masonic Charitable Foundation, we should not forget our own West Lancashire Freemasons’ Charity. He encouraged brethren to, where possible; use the gift aid envelope scheme to further swell charitable donations. He informed everyone that last year, the scheme realised a further £23,000 at no cost to the brethren and this year the figure is likely to be of the order £27,000. He concluded by thanking the members of the lodge for their support, assistance and hospitality, saying what a thoroughly enjoyable occasion it had been.

As part of the festivities, a raffle was held that swelled the lodge’s charity account by £140.50. The proceedings were further enhanced by a delightful rendition of the master’s song given by Ellis Wilkinson (Snr) accompanied by John Whittall on the piano.