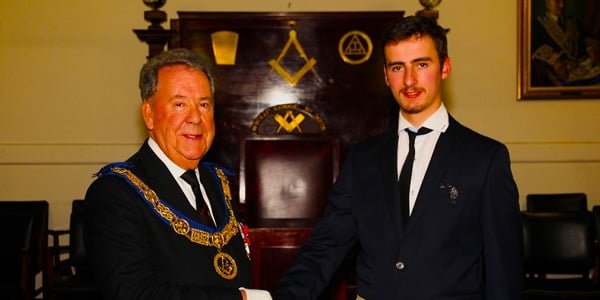 The Provincial Grand Master of Leicestershire and Rutland, RW Bro David Hagger, was kindly offered and willingly accepted the gavel at the meeting of Wiclif Lodge No. 3078, which meets at Lutterworth Masonic Hall, in order to Pass Bro William Robinson to the degree of a Fellowcraft

Those present at the meeting held on Wednesday 8th April 2015, accompanied by his Provincial Officers, witnessed a truly wonderful and unique ceremony with the Provincial Grand Master not only Passing Bro William but also delivering the Second Degree tracing board.

Bro William has his own part in the history of Wiclif Lodge and the Province being Initiated into the fraternity at the age of 19 by special dispensation of the Provincial Grand Master. Bro William has a long standing family connection with Freemasonry with many of his family being members of the Craft. His great grandfather and namesake, W Bro William A Robinson, was Past Master of Wiclif Lodge in 1970. His grandfather, W Bro Michael A Robinson PPSGW is also a Past Master of the Lodge and was in the Chair in 1974.

The lodge room at Lutterworth was packed with over 100 in attendance to witness this historic event.

After the meeting, the Provincial Grand Master said: ‘I was thrilled to be asked to Pass Bro William to the degree of a Fellowcraft who was an excellent candidate. It was extremely good to see so many young brethren in the lodge being involved in a very high standard of ceremonial work.’

He also paid tribute to W Bro David Milner ProvGTyler who stood in as acting Master and has recently been appointed to Past Assistant Grand Director of Ceremonies in recognition of his commitment to masonry. The PGM continued to thank all of his Provincial Officers for their support in attending the special meeting.

After the meeting, at the Festive Board, a donation of £600 was presented to the Provincial Grand Master for the Leicestershire and Rutland Masonic Charity Association.