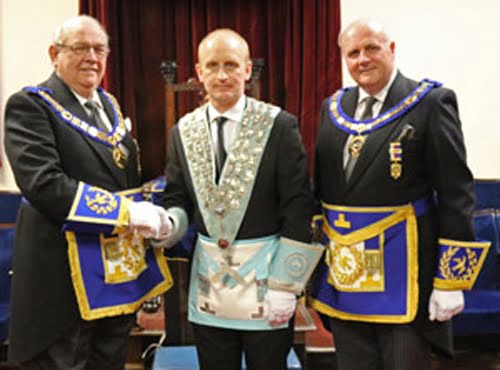 Philip (left) and David (right) congratulate the WM David Forrest on his installation.

After transacting the regular administrative business of the lodge, it was raised to the third degree. Following their entry into the lodge, the WM Mark Dunn had the pleasure of welcoming the principal guest of the evening, Philip Gunning and his colleague, David Winder. Philip thanked Mark for his welcome, wishing him well for what he was sure would be an excellent ceremony.

Master Mason, David Forrest, was duly presented for installation to Mark, as the installing master, by Geoff Saul. Mark informed him of his duties as master and went on to install David into the chair of the lodge in a full ceremony performed in a first rate manner that was appreciated by all concerned.

The working tools of the third, second and first degrees were all presented in an excellent manner by David Pemberton, Simon Wright and John Whitehead respectively.

Following his installation as master, David was addressed by Mark Dunn. He was then invited to appoint and invest his officers with Simon Wright being invested as senior warden and Mike Cowsley as junior warden. They were individually informed of their duties by Derek Thompson. The address to both wardens was given by Terry Turley with the addresses to the deacons being given by John Rimmer. All the addresses were given in a commendable manner by the individual lodge members. The ceremony concluded with the address to the brethren, expertly presented by the principal guest, Philip Gunning

Following the conclusion of the ceremony Philip brought the congratulations and good wishes of the Provincial Grand Master Tony Harrison, commenting on the excellent manner in which the WM had been installed in the chair by his predecessor. He congratulated David on attaining the chair, wishing him well for his term of office and the work of all the brethren who had a part to play in what had been a first class ceremony.

David then had the pleasure of presenting a letter to Philip detailing the lodges charitable giving during the year. This amounted to £420 in support of the West Lancashire Freemasons’ Charity and as part of the forthcoming tercentenary celebrations, £300 in support of the Masonic Charity Fund.

Concluding the business of the day, David Winder had the pleasure of presenting Mark with a past master’s jewel in recognition of all the work he had done during his year as master, a year in which Mark had overseen three second degree ceremonies in addition to the preceding firsts. 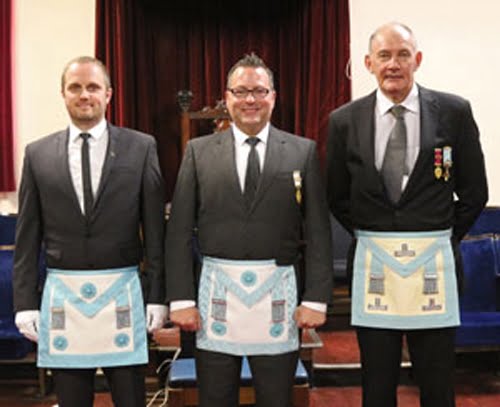 Later in the evening Philip, on his own behalf, commended the lodge on the excellence of the installation ceremony that he had witnessed earlier. He congratulated Mark on the splendid manner in which he had installed David in the chair and wished David a happy and successful year in office, noting that a candidate was already in the offing.

He went on to congratulate the lodge DC and ADC, John Rimmer and John Whitehead for their contribution to the workings of the day and made special mention of the input from master Masons, David Pemberton and Simon Wright, as part of the working tools team.

Turning to his colleague David Winder, he thanked him for all the work he does for the Province and also thanked grand officer, Geoff Saul and Provincial Deputy Grand Director of Ceremonies David Thomas for their contribution to the day’s events. He continued by thanking the four acting Provincial grand officers; the two Mikes, John and Bill, for their support and assistance in making this a memorable day for WM.

He informed the brethren that West Lancashire is the only Province with members on every Grand Lodge committee with initiatives originating in West Lancashire being accepted by Grand Lodge. He particularly mentioned the Membership Focus Group by way of example and reminded the brethren that there is no such thing as a bad idea. He encouraged brethren to come forward with ideas they may have that would contribute to best practice. He concluded by thanking the members of the lodge for their support and assistance saying what a thoroughly enjoyable occasion it had been.

The proceedings were further enhanced by a delightful rendition of the master’s song given by Derek Thompson accompanied by Cedric McIlwaine on the piano.

As a mark of appreciation for his support and input, David Forrest concluded the evening by presenting Philip with a bottle containing a very acceptable alcoholic liquid and a beautiful orchid for his wife, Anne. He hoped it would serve in some small way as compensation for the many evenings Philip is away on Masonic duties.