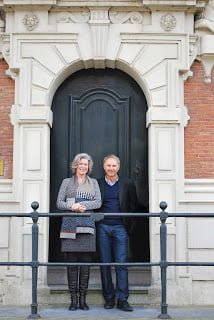 Ritman’s daughter Esther and Dan Brown
The Ritman Library, more properly known as the Bibliotheca Philosophica Hermetica, in Amsterdam is regarded as one of the finest private collections of rare books in the world in the field of Hermetic traditions. Currently, the collection comprises over 25,000 works, including some 4,600 manuscripts and printed books dating before 1900. Founded by Netherlands’ businessman Joost R. Ritman, the collection encompasses Hermetica, alchemy, mysticism, Rosicrucianism, gnosis, Kabbala, and Western esotericism.

The library announced today that author Dan Brown has just donated €300,000 (US $336,000) to preserve and digitize a portion of its vast collection.

Thanks to Brown’s donation, the public will be able to access the core collection of some 4,600 ancient books online in the near future. Brown is a great admirer of the library (widely known as The Ritman Library after its founder Joost R. Ritman) and visited on several occasions while writing his novels The Lost Symbol and Inferno. “I consider it a great honor”, the world-famous author said, “to play a role in this important preservation initiative that will make these texts available to the public.” The Dutch Prins Bernhard Cultuurfonds is also contributing to the digitization project, to the amount of € 15,000.

The comprehensive digitization project will be carried out by Picturae, a company specializing in making Dutch cultural heritage digitally accessible. It is expected that the core collection of The Ritman Library will become available online in the spring of 2017.