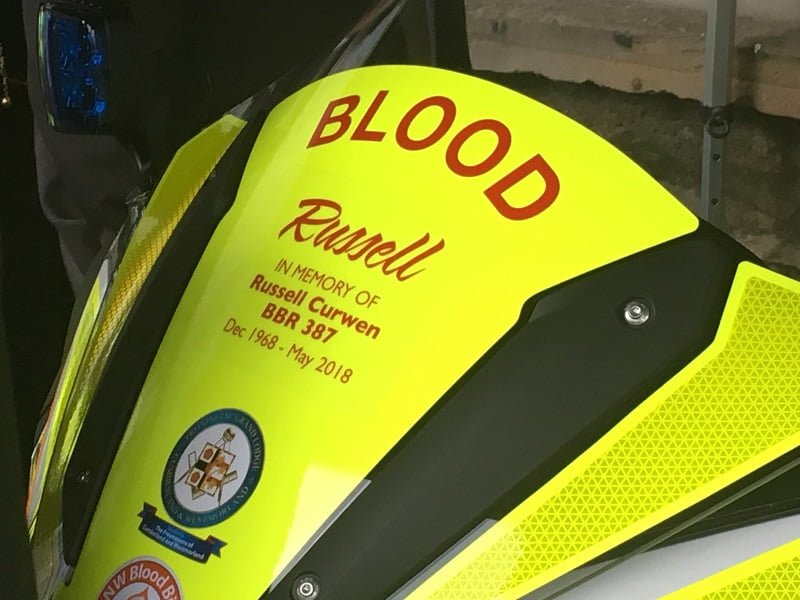 On Monday 16th July 2018, Brethren and Companions from the Province of Cumberland and Westmorland joined family and friends of Russell Curwen at Kendal Masonic Hall to present a new BMW R1200RT-P blood bike in his memory. Russell sadly passed away following an incident whilst he was volunteering as a “Blood Biker” earlier in the year.

The RW Provincial Grand Master Bro. Norman James Thompson accompanied by the Her Majesty’s Lord Lieutenant of Cumbria, Claire Hensman, and over 200 brethren made the presentation of a new bike for Blood Bike North West.

The event was also attended by Mrs Pat Curwen and Mr Ken Curwen (Parents), Mrs Susan Fiddler (Sister), Mr Phil Curwen (Brother) and Mr Terry Curwen (Uncle). They were supported by members and friends of the North West Blood Bike Lancs and Lakes Charity, together with members from the Blood Bikes Cumbria Charity.

The new bike bears the name of Russell Curwen and will be used to deliver urgent supplies to hospitals within the province.

Following a short reception, during which Her Majesty’s Lord-Lieutenant was introduced to all concern, the Provincial Grand Master of the Province of Cumberland & Westmorland, Worshipful Brother Norman James Thompson DL, gave an address in which he said;

“On behalf of the Freemasons of Cumberland and Westmorland, I am delighted to be able to present this third fully equipped motorcycle to the North West Blood Bikes Lancs & Lakes Charity. This third bike is named “Russell”, in memory of the Blood Bike Volunteer, Russell Curwen, who sadly lost his life whilst on duty with the charity. The Blood Bikers are unsung heroes, supporting the community at large and to whom we owe a great debt of gratitude. I am also delighted to announce that we will be funding the purchase of a fourth motorcycle, thus ensuring that the two Blood Bike Charities covering the County of Cumbria, have both received two new bikes funded by my members”.

Mrs. Claire Hensman then addressed all present and she too was full of praise for the work of the volunteer Blood Bikers and expressed her sadness at the loss of Mr. Russell Curwen. She also praised the kindness and generosity of the Cumberland & Westmorland Freemasons in supporting such a wonderful cause.

The guests then gathered outside where the motorcycle received a blessing by Provincial Grand Chaplain Rev. Robert Friedrich Roeschlaub. The official presentation of the motorcycle was then carried out by the Provincial Grand Master, Norman Thompson who handed over the keys to the Chairman of the North West Blood Bikes, Mr. Paul Brooks.

One further presentation was made on behalf of the North West Blood Bikes Lancs & Lakes, when Karen Carton, Assistant Area Manager – Central, presented Mrs. Pat Curwen (mother) with a candle in memory of Russell, which had come all the way from the West Coast of Ireland having been commissioned by the Blood Bikers fraternity.

Although Russell was not a Mason himself, he was very much liked and loved by all who knew him and this presentation was a very poignant occasion, whilst at the same time recognising his commitment to the Blood Bikes Charity as a volunteer rider, whose unselfish dedication will have saved countless lives and helped the sick and infirm.

In a letter of thanks to the Provincial Grand Master of the Province of Cumberland & Westmorland, Mr. Simon Hanson Fleet Manager and Volunteer Rider for the North West Blood Bikes, said;

“Your hospitality on Monday was second to none with an array of distinguished guests which meant the night was even more special and one that the family has been able to take comfort from at this difficult time. On behalf of the complete Charity, I would again like to thank you for this superb donation and I can assure you it will make a tangible difference to the operation of our Charity and enable us to provide the best support possible to the NHS and the “Local Community” in South Cumbria who are the eventual recipient’s of our service”.