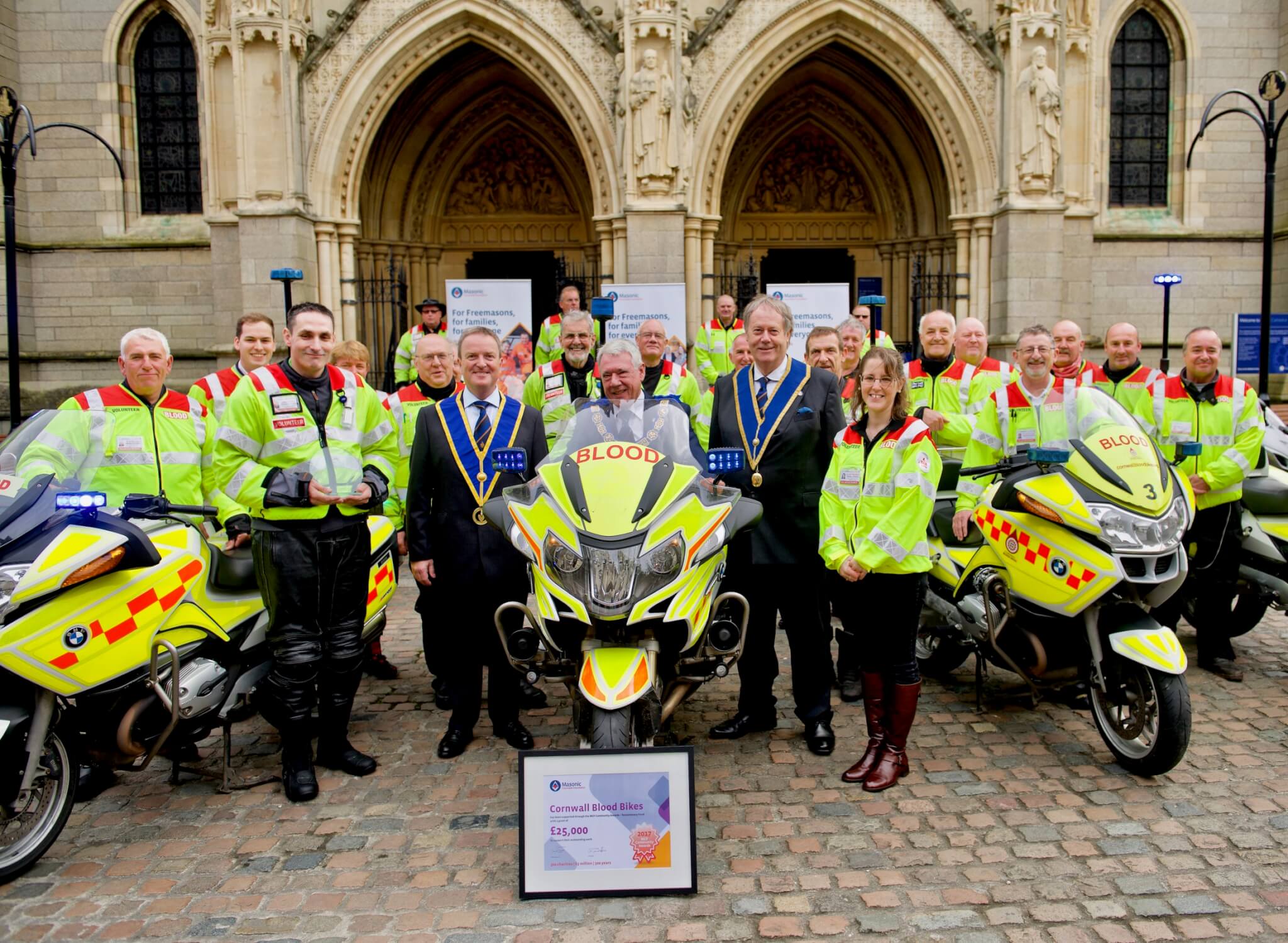 Cornwall Blood Bikes, who received the most votes in Cornwall, were presented with their MCF Community Awards grant of £25,000.

Thanks to this grant, the charity is buying a brand new 1200cc BMW response bike and two further second hand bikes; upgrading its ageing fleet that runs throughout the year in all weathers.

Cornwall Blood Bikes was one of six self funded organisations in the county to be nominated for the MCF Community Awards, which saw £3 million handed out to 300 charities across the UK.

The volunteer bikers, who transfer life-saving medical supplies out of hours across the county and further afield saving the NHS in Cornwall around £250,000 each year in taxi fares , arrived at Truro Cathedral to meet the Provincial Grand Master for the Province of Cornwall, Stephen C Pearn for the official cheque presentation.

Ian Butler, the fundraising manager for the Blood Bikers, thanked the public and Masonic Lodges of Cornwall for their amazing support:

To have this amount of money donated to us is fantastic. It is an iconic day in the Blood Bikers history. We have been overwhelmed by the public response and want to thank the Freemasons across all of Cornwall for their support. It would take nearly two years and a lot of hard work to raise that amount of cash.  We have already ordered a brand new BMW that is due to arrive in April next year. We are also buying two second hand bikes to replace two in the fleet that have clocked up 140,000 miles each. The new bikes will cut down on maintenance and off-road time as well as making us more efficient. This is a brilliant start to our campaign to update our fleet of machines.

Speaking at the official presentation on Saturday, Provincial Grand Master Mr Pearn, said he was delighted for the Blood Bikers: “The donation from The Masonic Charitable Foundation will literally save lives and it’s also a great way to advertise what the charity does. Cornwall’s Masonic Benevolent Fund has been supporting so many communities across Cornwall for many years. It’s a great organisation that is fun to be a part of as well as helping others. Our members come from all walks of life.”

The  Charity Steward for Caradon  Lodge who meet in Saltash,  Ross Fisher, has been giving blood since he was 18 was especially pleased with the Blood Bikers donation: “Since 1995 I have been donating platelets (these are formed in the blood and help it clot and to stop bleeding). Last week was my 250th donation. I have four times more platelets in my blood than the average man. I keep fit and well and feel very proud that I’m able to help others in times of need. The Blood Bikers are a dedicated team giving their time to keep such a vital service running.”

Also attending Saturday’s presentation was one of the oldest members of the Blood Bikers team, Conrad Dowding 80, from Launceston, who is still enjoying life on two wheels: “I joined the charity after I lost my wife, Pam to breast cancer. I couldn’t do anything to help her which is why I joined the Blood Bikers team. It was my way of giving something back.” I  feel part of a great team that is working together to do something worthwhile. We get no NHS funding, we use our own bikes and we work out of hours and can be called on at anytime.”