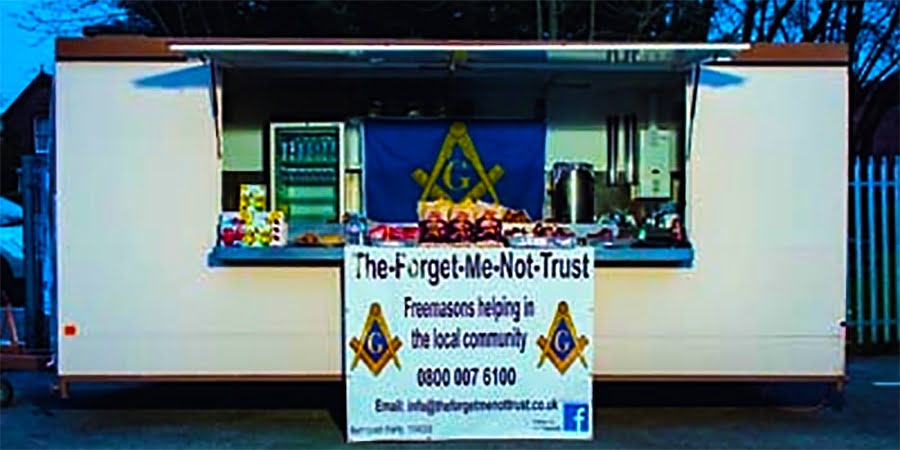 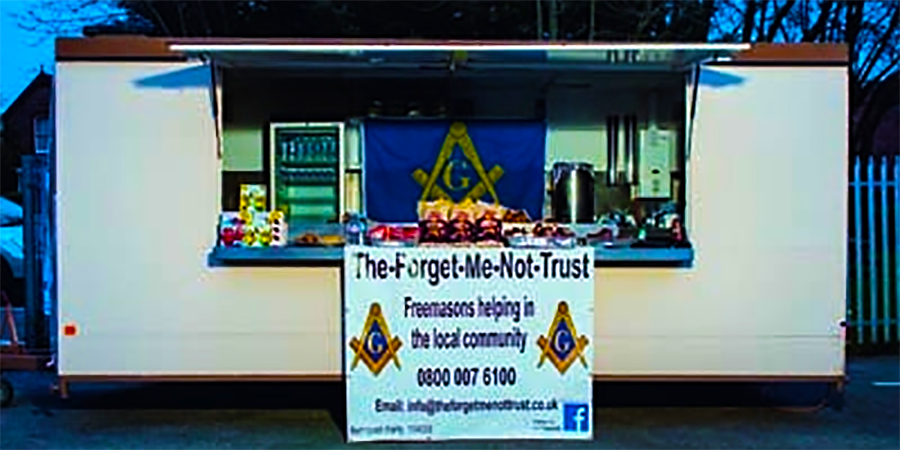 When Ezra McGowan started handing out crisis packs to the homeless from a burger van, he knew he had found his calling. Imogen Beecroft discovers how it complements his Freemasonry

At 10pm on a cold February evening, a biting wind is rattling the windows of Ezra McGowan’s house. But while most of us would keep warm inside on a night like this, Ezra zips up his fleece and heads out to work.

By day, Ezra runs a waste disposal company, but he spends his free time handing out food and other necessities to homeless people in London, Peterborough and Manchester.

Ezra, who is a member of Hand and Heart Lodge, No. 4109, started The Forget Me Not Trust two years ago with his brother Nathan because, ‘We were seeing homeless people everywhere we went in these major cities. We realised this was an epidemic problem, so we thought we should try to do something about it. We’ve been blessed in our own way with business, so we’re in a fortunate position and wanted to give something back.’

The brothers acquired an old burger van, pitched up in Manchester city centre, and started giving out food and hot drinks to the local homeless population. Ezra and Nathan are both self-employed, which gives them a certain degree of flexibility with their working hours. However, Ezra explains, ‘If we finish work at 3pm, then we’ll go out for a few hours, but usually we like to go out late in the evening. Those are the hours when we’re really needed.’

Ezra is modest about what they can provide. ‘It’s not à la carte. We try to serve food that we can make go a long way – soup, coffee, tea, biscuits, sandwiches. If we can, we serve hot food, but it’s really about how far we can make it go.’ A meal or hot drink isn’t the only necessity on the menu, however. To those in particularly desperate circumstances, the brothers also provide vital crisis packs, which contain hats, gloves, socks, toothpaste, a toothbrush, toilet paper and sanitary products for women.

‘We’ve been blessed in business, so we’re in a fortunate position and wanted to give something back.’ Ezra McGowan

The Forget Me Not Trust mainly operates in Manchester, where Ezra lives, and Peterborough, where he owns property, but the brothers also travel down to London for weekends when they’ve raised enough money to do so.

In London the van pitches up at Lincoln’s Inn Fields, just a stone’s throw from Freemasons’ Hall.

Revisiting the same areas means Ezra has a few regulars who he gets to know over time, and he’s even met some people who have masonic connections in their families.

He stresses that the homeless people he meets come from all walks of life. ‘Some people have been very successful businessmen and have just fallen on hard times. Maybe they’ve missed mortgage payments and things have got on top of them so they’ve been reduced to homelessness. It could be anyone. It could happen to each and every one of us.’

Just last month Ezra met a boy from Ireland who was living on the streets of Manchester with his dog. When Ezra spoke to him, the boy explained that he’d had an argument with his parents and, with no money and nowhere to turn, ended up homeless.

‘We gave him some hot food and a crisis pack, but he had no one to turn to. I’m not an angel; I fell out with my parents as a child, but we always had family members I could have turned to,’ explains Ezra. ‘Some of the people we work with have no family at all. Others might have mental health problems, which makes it so much harder to get help.’

Luckily, he says, some people do get rehoused, but all too often these stories don’t have happy endings. ‘A few months ago a man was killed. He was beaten up by some youths because he was homeless and they burned him to death. The people we try to help are often neglected, abused and forgotten. That’s how we chose the name for the charity: we wanted to show them that they haven’t been forgotten by everyone.’

Ezra finds it particularly difficult when he encounters young women living on the street. ‘While the homeless population is mainly male, there are usually about three or four women for every 25 men coming to us for help. Women on the street are in a very vulnerable position and it’s heartbreaking to see. I have daughters myself and I’d like to think that if anything like this ever happened to them, there would be someone looking out for them.’

Ezra sees his work with the homeless as his calling, explaining: ‘Some people are blessed to be doctors or psychiatrists. My brother and I haven’t been able to do that, but we’ve always been hard workers and can help people by offering them food and support. We’re everyday lads, not multimillionaires, but this is what we were meant to do. It’s very satisfying and is a breath of fresh air.’

While helping people in this way is undoubtedly rewarding, it isn’t an easy ride. He says: ‘We do get some abuse, particularly on a Friday or Saturday night, when it’s busy in town. Some people call us “do-gooders” and “churchgoers” or swear at us. It’s not all rosy on the street.’

Despite these challenges, Ezra estimates that they can help 60-70 people every night. However, providing everyday essentials, food and drinks to this many people is a costly business, and he can only do so much of it on his own.

Initially, Ezra and Nathan funded the project themselves, buying supplies in bulk from wholesalers. When it started to grow in scale and ambition, however, Ezra turned to his lodge for extra support.

Tony Harrison, the Provincial Grand Master for West Lancashire, emphasises that the ideals behind The Forget Me Not Trust coincide wholly with those of Freemasonry. ‘Ezra told me of the work they do to support these individuals in need by providing warm food and clothing. This is a wonderful example of members of our fraternity working in the community to support others less fortunate than themselves.’

‘We’re everyday lads, not multimillionaires, but this is what we were meant to do.’ Ezra McGowan

Since reaching out to other Freemasons, the response has been excellent. ‘The feedback we’re getting from brethren has been fantastic,’ says Ezra. ‘Hand on Heart Lodge has been wonderful – the brethren have given donations and arranged a raffle to raise money for The Forget Me Not Trust. I don’t think anything like this has really been heard of in Freemasonry before and now other lodges have started donating, which is great.’

In return, Ezra proudly displays the square and compasses wherever he can. He explains that he’d been a mason for 15 years when he had an accident and was offered help through the fraternity. ‘It was a wonderful, unexpected thing to have people knocking on your door offering to help you. I thought it would be nice to give something back, so now we try to promote Freemasonry in the community.’

Ezra is hoping to increase his fellow masons’ involvement with the charity, and has big plans for the future. ‘We’ve started small, but once we’ve got everything running perfectly in Manchester we’d like to branch out to other major cities. It’s our ambition to reach a point where we can advise other Provinces how best to run these events. Ultimately, we’d like to have one event a week run by Freemasons in every major city in the UK.’

Ezra enjoys engaging people in lively discussions about Freemasonry and challenging their existing preconceptions about the fraternity. ‘Lots of members of the public come over and talk to us when they see the badge displayed. Sometimes they might have a negative impression of Freemasonry, but we’re finding that we can open their eyes and change their perspective. Often we have people saying, “Oh, that’s fantastic – I never knew that about Freemasonry.” ’

Find out more about the charity’s work and how to lend your support at www.theforgetmenottrust.org.uk