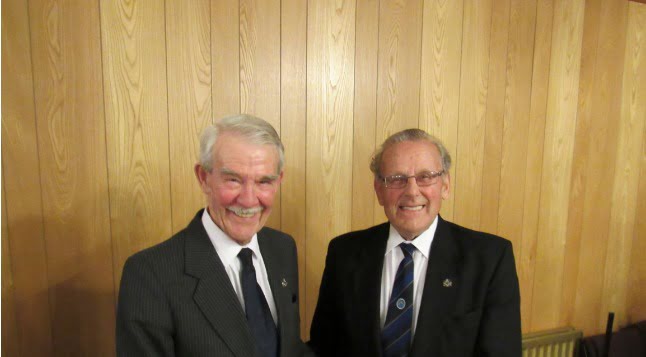 Many residents who reside and work in the beautiful Teesdale of Durham will have become familiar with certain family names that have provided services. These will have inevitably included transport, clothing groceries, hardware, accountants, doctors and pharmacists to name but a few. One such Pharmacist was William Burtt Holden, who for serval decades was very well known for his professional skills which he extended by establishing the first animal pharmacy in the area. Although, the sign above the premises bearing his name is no more, William most certainly is. Bill as he is more affectionately known continues to live and contribute to the dales life in community that he loves.

So it came as no surprise that many of the brethren of the Stanhope Lodge of Freemasons, of which he was a member for some fifty years attended in numbers at their last regular meeting. They in turn where supported by visiting members from surrounding lodges. Included in that number was the Assistant Provincial Grand Master, David Sanders Hay who attended, both to join in the celebrations but also to present a 50-year certificate from the Provincial Grand Lodge of Durham to Bill.

David took the opportunity before making that presentation to inform those in attendance about Bills antecedents including domestic, professional, civil and masonic as follows;

Bill was born on the 3rd of August 1935, being the eldest of three children being raised in Chester-Le-Street, where both his parents were Head Teachers. He was educated at the local Grammar School and then moved to Sunderland to enter the School of Pharmacy. He qualified as a chemist met his wife to be Nancy and began work at Boots Chemist. Employed he managed to save enough money to buy her an engagement ring to reply the thread he’d given her when he popped the question. They married in 1958.

Bill was called up for National Service and went into Officer training at Fleet where he learned to drive – although it is said that someone simply gave him a set of keys and said,” we need a driver” and he automatically passed. Apparently, he still secretly enjoys his occasional nickname of ‘boy racer’

Completing National Service he returned to the Northeast to work for WCF at Hexham where he learned about animal medicines. He and Nancy then moved to Stanhope and bought a share in Stan Smith’s pharmacy. By 1966, they had three children, Adrian, Sarah and Caroline. It was at this time, at the age of thirty, that Bill joined Freemasonry, encouraged by his father-in-law, Joe.

Initiated into Stanhope Lodge on 11th May 1966, progressing on to being Worshipful Master in October 1984. For seventeen years he was also a member of Hudson Lodge. In 1993, he was appointed Past Provincial Grand Director of Ceremonies and further honours came in 2009 being promoted to Past Provincial Grand Sword Bearer.

Eventually, Bill sold his share in Stan Smith’s pharmacy, purchasing similar premises in Wolsingham. He and Nancy bought the Poplars where another child, Richard was born in 1976. By this time Bill reputation had evolved by establishing the animal pharmacy and becoming a respected trainer for young pharmacists wishing to qualify for the Agriculture Vet Diploma.

Bill and Nancy are very well known characters in the Durham Dales Area, as members of many social groups. Outside of Freemasonry, Bill has been Chairman of the Round Table and later joined Rotary. The Holden Family were all regular church goers and supporters of local dances and numerous social occasions.

Bill sold his business interests in the mid 90’s achieving his ambition of completing 50 years as pharmacist only finishing his working life two years ago at the age of seventy eight. His children, of which he has ten are now scattered around the world.

David concluded by stating that Bill was a man who had contributed much to his local community, it was with this mind that his fellow brethren in Freemasonry wished him many congratulations’ on achieving 50-years in the Craft with the hope he would enjoy many more.

At the festive board lodge members reminisced may happy memories with Bill, further marking the occasion with gifts and label pin.