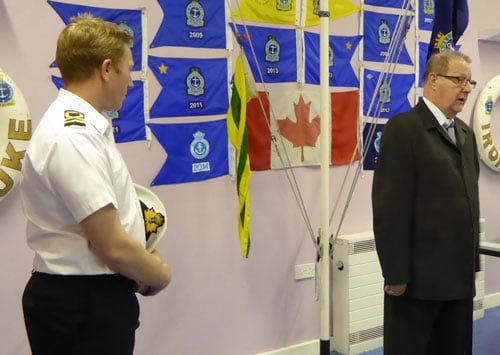 A chance comment from a work colleague prompted Ken Baxter to spring into action. Ken, a member of Yachtman’s Lodge No 3698 meeting at Woolton Golf Club, is always raising money for good causes and this was no exception despite the fact that he has not been in the best of health for a while.

Ken spoke with the Woolton Group Chairman Andrew Whittle and it was agreed that the group would be able to help the cadets and an all-in-one colour printer was purchased. Vic Albin, retiring Vice Chairman of Woolton Group accompanied Ken for this presentation.

The Commanding Officer of Training Ship Iron Duke based in Huyton Michael Farrell explained the background to the Sea Cadets saying that they work in partnership with the Royal Navy under a Memorandum of Understanding (MOU) and receive corporate support from commercial shipping companies and the maritime sector. Their core purpose is to celebrate Britain’s maritime heritage and contribute to its future development by supporting young people as Sea Cadets.

Michael said: “Training Ship Iron Duke is a provider of activities with a nautical theme for the youth of Huyton and the surrounding area and was established in 1942 and can regularly be spotted around the local community. If you are looking for training afloat and are aged between 10 and 18 or thinking of a career at sea then the Sea Cadets can help. 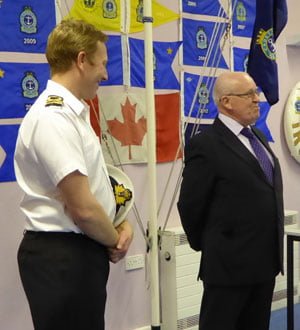 Based on the customs of the Royal Navy, the Sea Cadets provide training in sailing, powerboating, canoeing, expedition leadership, engineering to name but a few. We also run the Duke of Edinburgh Award Scheme and the opportunity to gain BTEC’s and other nationally recognised qualifications such as the Institute of Leadership and Management (ILM) qualifications.

Recently one of our leading cadets has been selected as a Navy Board Cadet – one of six across the country. This prestigious role offers a rare insight into naval policy and the work of senior Royal Navy serving officers. This is the second time a cadet from the Huyton Sea Cadet unit has achieved the honour.”

Commanding Officer Michael Farrell said that they were always extremely grateful for the help and donations provided by outside organisations and the printer presented would help the cadets with the projects they pursue and will certainly be put to very good use.

The cadets receive their printer.