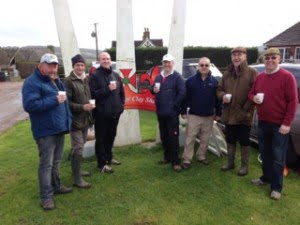 February the 15th was the second MMCSA event and was held at at Keeper Lodge just outside Chepstow. It was cold morning and the dark grey clouds were threatening rain, but the hardy bunch turned up as promised, together with two new comers. Our hosts, Clive and Rob Prichard met us as we arrived from 9:30 and made us all very welcome with a nice hot coffee and bacon roll.

I didn’t arrive until around 9:45 and Clive was a little confused at who Paul was and called each the early arrivals Paul until I finally arrived, meeting Clive for the first time face to face. (I think I need a cap with my name on it and issue one to all the members with the words ‘I’m not Paul’.)  Some were more keen than other to start the days shooting and arrived at 9:15am, but unfortunatly at the wrong ground (you know who you are, I’ll send you a map next time).

After a quick safety brief Clive and the group agreed to split into two groups, with Clive taking the two new shooters for a private session with tuition and gun hire. The rest of us gathered our guns and head down to the first of the 6 stands. By the time we completed the 3rd stand the clouds let loose their furry but luckily by this time we were in a cover stand. Unfortunately for each shooter they were facing the rain head on when they entered the shooting stand.

The group were warmly met by all the other shooters as we worked our way around the stands and a thoroughly good time was had by all. Still in the end there had to be one winner.
And the winner was………………………………….John Hemmings from the province of Bristol, Well done John.