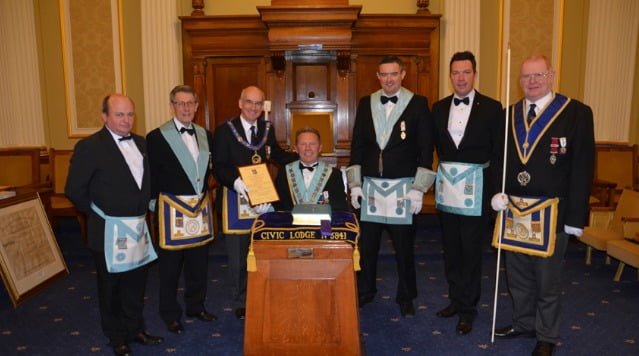 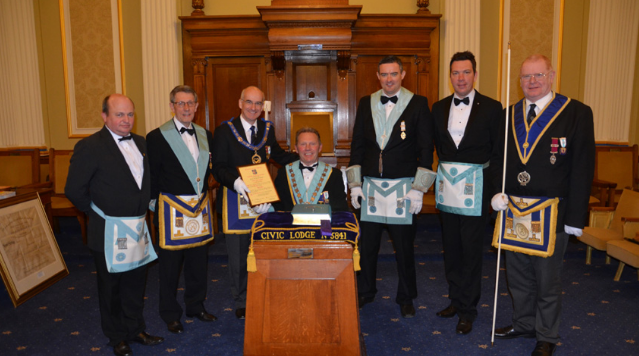 Assistant Provincial Grand Mater, Craig Steele, the Assistant Provincial Grand Master, accompanied by his Director of Ceremonies, Jeff Awdas attended Civic Lodge’s last meeting at Burdon Road in Sunderland before their summer recess. The reason for the visit was to present Bob Johnson with a certificate for 60-years continuous service to Freemasonry.

After the Lodge was opened the Worshipful Master, Terry Richardson, conducted an excellent double third degree ceremony to raise Philip Hargrave and Karl Craigs. The Deacons, Peter Marshall and Derek Purvis admirably paraded the two Fellow Crafts around the Lodge followed by some faultless pieces of work by Past Masters, Ken Stobart and Neville Curtis.

Once the ceremony had been completed, Craig Steele rose to present Bob Johnson’s 60-years long service certificate, unfortunately due to ill health, Bob was unable to attend that evening, so Craig duly presented it to Terry Richardson, requesting that he delivers the award to Bob at the earliest convenience.

Ironically the final thing on the agenda for the evening, was, to declare that Bob Johnson was duly elected Treasurer for the ensuing year after being nominated at the previous meeting, extending as the longest serving Treasurer in the history of Civic Lodge 40th year this year.

After the Lodge was closed, all retired to the festive board, where the usual delights of Civics’ ‘fine dining’ were experienced, along with the excuse to celebrate yet another occasion that evening, that being Bill Finkle’s birthday, marked with a cake to cap off the night.

True to form Terry went along to Bob’s house accompanied with Bill a week later to present Bob with his well-deserved certificate. Bob was really pleased to receive the certificate and said that it would take pride of place on his wall, next to his 50th. Although he was unable to make the meeting of Craig’s visit, he was hoping to get to the next meeting after the recess and was disappointed he had missed such a good night, but hopes to meet Craig in the future to thank him.