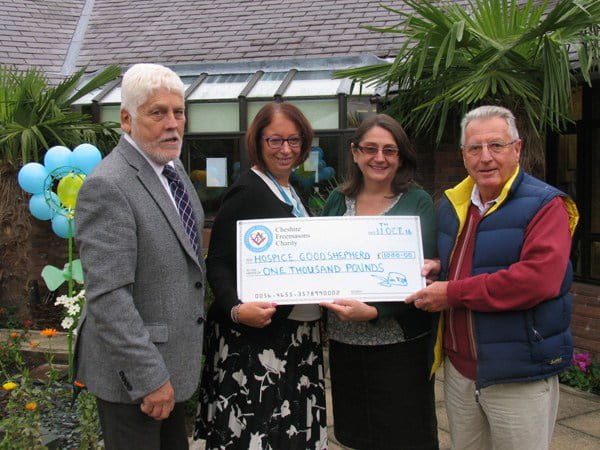 The Hospice of the Good Shepherd, is situated in the village of Backford near Chester.
In 1990 Gordon Martin a member of Travellers Lodge No. 2609 and also member of the Rose Croix Support Group started giving Red Roses ( a symbol of the Rose Croix Degree ) to each resident on a weekly basis. In recent years Carnations have replaced the roses. The Support Group purchases other items which assist in the well running of the Hospice.
Vanessa Brown , Matron said ” all of these extra little items are so much appreciated by the residents and staff of the Hospice”

Gordon was at the Hospice when The Provincial Grand Charity Steward,

Colin Ross called in bearing a cheque from the Cheshire Freemasons’ Charity for £1,000

The modern Hospice movement was founded by Dame Cecily Saunders with the establishment of St. Christopher’s Hospice in London in 1967. This inspired local, Vivien Smith who realised that their philosophy that a patient with a life limiting illness needed not only excellent medical and nursing care but also support for their practical, emotional, social and spiritual needs. At her retirement speech in 1984 as Matron of the Royal Infirmary in Chester, Vivien announced that she was going to build a Hospice for Chester and the surrounding areas.

In 1984 the first public meeting at Chester Town Hall called by Vivien Smith who identified a need. Fundraising began with the establishment of a Committee to raise a target of £600,000 to buy and equip a new Hospice.

In 1985 the former Vicarage and grounds at Backford was bought at Auction for £85,000 and the first hospice shop in Northgate Street, Chester opened it’s doors.