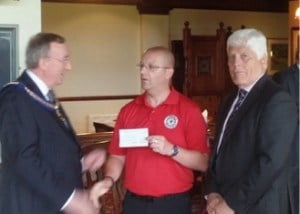 It was also the venue for the Annual Community Cheque presentations; George Mann APGM and Colin Ross Provincial Grand Charity Steward were on hand to present five cheques to very worthy causes nominated by members in Area Five:

The Cheshire Search and Rescue Group who operate 365 days per year to support Police and Fire Services throughout Cheshire have a team of skilled members who can turn their hands to Mountain Rescue or work in flood conditions. Anthony Horrigan received a £1000 cheque which will be used to buy new rescue vehicles and equipment.

Lydia’s Lodge – Support for Families who have lost Children 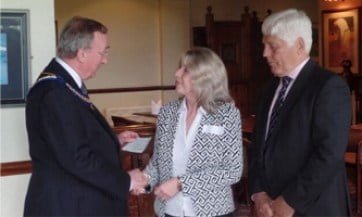 Lydia’s Lodge have a Holiday Lodge at Portmadog specially designed to provide holiday accommodation for children with life limiting illnesses Children and families use the facility and enjoy a stress free break away from their homes. Jackie Wilson received a £300 cheque which will go towards a play station for use by children in the evenings and when the weather is unkind for external activities.

The Arthritis Care Unit based in Chester hold a series of meetings up and down the country for those suffering with Arthritis; their meetings include coffee mornings, whist drives and bingo. Janet Shaw received a £750 cheque to purchase a deliberator which will be available at every meeting. George Mann explained members were already trained to use the equipment and he hoped it would never have to be used. 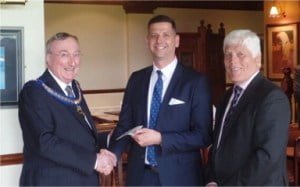 The Willaston Scout Group are based in the village of Willaston, between Crewe and Nantwich, running an exciting and varied programme for over 100 Beavers, Cubs and Scouts. Their Scout hut is in need of a little TLC and with the help of Cheshire Freemasons they will be able to refurbish the roof and accommodation. Stuart Moreland one of the Scout Leaders received a £1000 cheque from George Mann APGM who wished them well and explained we too are looking for support in building our Cheshire Scout Lodge. 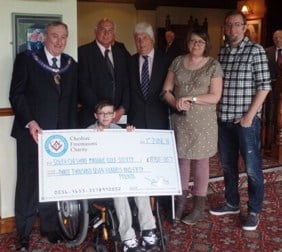 Since 1972 the South Cheshire Masonic Golf Society have generated funds to purchase powered wheel chairs for disabled children. The scheme was started by Harry Morgan a member of Clarence Lodge 2386 and every year they have presented at least one powered wheel chair to a deserving child. The Martin family will be one of this year’s recipients. George Mann handed over a £3750 cheque to the family to buy the specially adapted wheel chair. This chair represents 49 since the scheme started. The Society hopes to present another later this year following generous donations from Cheshire Lodges. 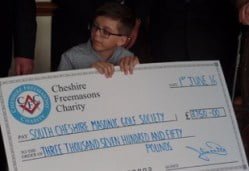 Young Rubin, one very happy little boy who will never forget the day Cheshire Freemasons gave him a Powered Wheelchair that made so much to his life. The chair is tailor made and designed to accommodate future growth.

George Mann and Colin Ross thanked all those who support the Cheshire Freemasons Charity (CFC) enabling our Province help and change the lives of so many members of the general public who work so hard for others in our community.