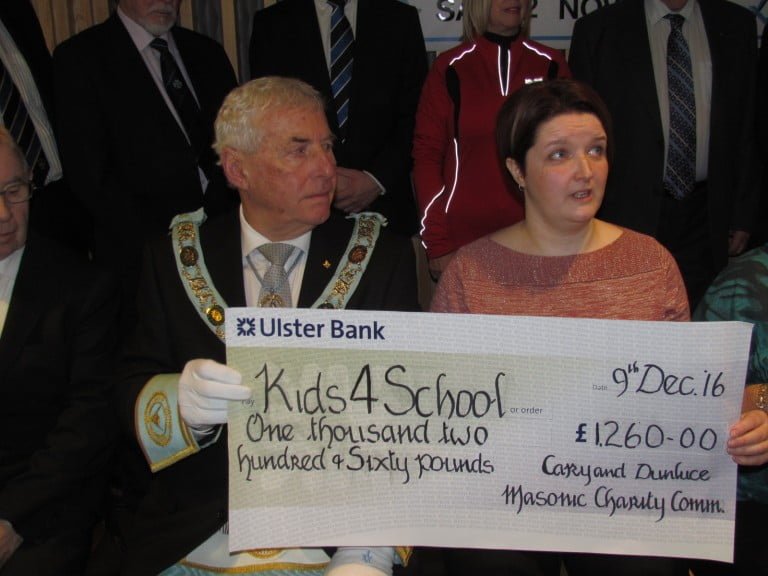 The members of The Cary and Dunluce Masonic Charity Committee returned to the Coleraine Campus of The University of Ulster this morning to meet with Right Worshipful Bro John McLernon, one of the Assistant Provincial Grand Masters of The Provincial Grand Lodge of Ancient Free and Accepted Masons of Antrim, and invite him, on their behalf to present cheque’s to their two nominated Masonic Charities, which are The local Dalriada Branch of Parkinson’s Support Northern Ireland and The Kids4School Childrens Charity.

Our first recipient Ms Sarah Stewart expressed her gratitude to the Brethren for their generous donation of One Thousand Two Hundred and Sixty Pounds only to support the work of Kids4School in Tanzania, Central Africa. They currently spend £ 39.00 per child to meet their schooling costs in Africa, and this donation will greatly enhance their ability to support more students in-country in Tanzania. Kids4School are a christian charity which provide funds to meet costs associated with the provision of free schooling to needy children in Tanzania.

For those interested in these things Kids4School have their offices in Belfast in NCM House. 218 York Street, Belfast BT15 1GY. Their bank is The Ulster Bank 202-206 York Street, Belfast. Sort code is 98-01-20 and their account number is 1080 3185. Kids4School are registered with the Charity Commission and their registration number is NIC 100163 and their Charity IR number is XT22815. We include a link HERE to their latest KIDS4School progress report, updating progress with their works in Tanzania and outlining their hopes for the future. This particular report was just released by the Charity in November 2016.

The Dalriada Branch of Parkinsons Support Northern Ireland was formed back in 2013, along with branches in Belfast and Fermanagh. Their representitive this morning was Mrs Ethna Watterson, a founder member, and current chair of the branch. Ethna understands better than most the benefits that their branch meetings in the Robinson Hospital bring to sufferers and their carers, as her husband had suffered from the illness for some 27 years. She was delighted with the amount presented and said it would be put to good use at a branch where membership had shown a steady increase. They were planning to take a group across to Scotland in the near future and this generous donation would help them to meet some of the costs and overheads associated with this trip.

Mrs Ethna Watterson with the Chairman of The Cary & Dunluce Charity Committee receiving her Presentation Cheque.

Rt Wor Bro McLernon then addressed the assembled Brethren, members of the Cary and Dunluce Masonic Charity Committee and thanked them, on behalf of The Provincial Grand Master, Officers and Members of The Provincial Grand Lodge of Antrim for all their work in making these annual presentations possible. The Cary and Dunluce committee were strongly supported by their parent Lodges, Chapters and other bodies and regularly make generous donations to support worthwhile local and national charities.

By now, I’m sure some of you will be trying to work out who the blond haired Brother in the red sports wear is. It is of course the hard working wife of Wor Bro Alister McKay, who supports the Committee every year, fulfilling the roll of group accountant, collecting funds, recording same and helping out where ever needed. Diane Thompson McKay, a past lady captain at Portstewart Golf Club, is a well known supporter of the work carried out by the Committee, and again, on their behalf, we record her contribution to the success of the day.

A Final Look at The Group.