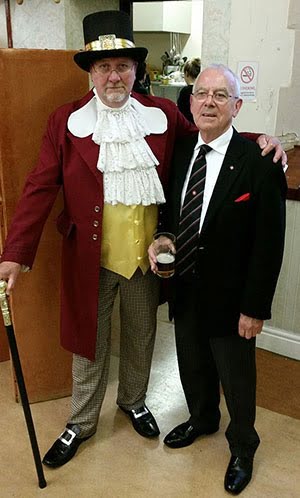 Another excellent ‘Old English Night’ at Heysham Lodge No 4108 witnessed a record breaking sum of £1,230 being raised for charities and good causes. The raising of this huge sum was no doubt helped by the fact that the festive board at Morecambe Masonic Hall was full to capacity, including 55 visiting brethren, six of which were masters in office.

Bob Malcolm looked the part of a fines master, dressed up as he was in an outfit resembling a 19th century ‘magistrate’. Before the festivities could begin however, a very special guest was waiting to be admitted in the shape of the customary ‘pigs head’ which was elegantly paraded into the room by Richard Dennison and placed next to the WM Barry Robinson. Some brethren were heard saying they thought the WM and the ‘guest of honour’ were related, but the magistrate missed the opportunity to find these guilty culprits.

There was plenty of good humoured banter all evening with Stephen Fox of Silverdale Lodge No 6926 bearing the brunt of most jokes and fines, all of which he accepted gracefully. The money collected on the evening, including the money raised from the charity collection in the lodge earlier in the evening, the ‘Chorley raffle’, the whisky draw and the fines taken from the brethren for apparent misdemeanours amounted to the incredible aforementioned sum of £1,230.

The toast to the visitors was given by Lee Taylor-Craddock the junior warden, following which the brethren of Heysham Lodge sang the ‘Heysham welcome song’, which they now sing at every ‘Old English Night’ prior to toasting the health of their visitors.

The visitors, who were all in fine voice and not going to be outdone, replied with ‘The visitors’ lament’, accompanied on the piano by Stan Davis of Uter Pendragon Lodge No 3481 (Cumberland and Westmorland), who was guest organist in the lodge earlier.

As can be deduced from the photographs, the evening proved to be very enjoyable and ended with the WM Barry Robinson thanking both Bob and Nigel for all they had done towards making the evening such a success.

Traditionally the WM provides a gift for all the brethren attending the ‘Old English Night’ which Barry continued in some style by supplying an inscribed pen and a bottle of ‘The master’s ale’.

The packed festive board at Heysham’s Old English Night.