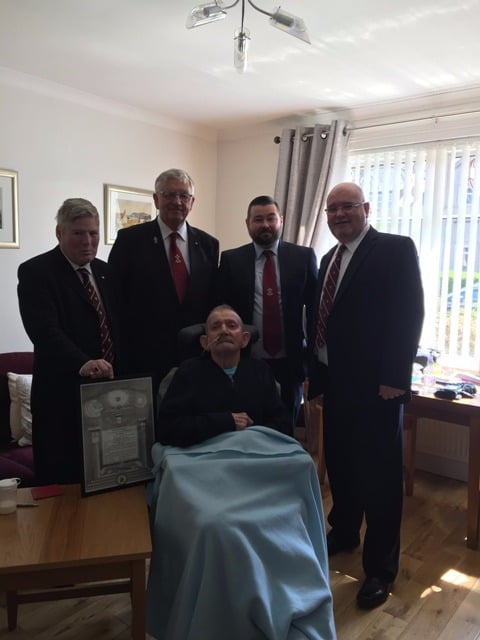 Bro, Hamish MacLean was finally raised as a Master Mason 40 years after he was Initiated into the Craft – thanks to three Lodges in two Provinces.

Although originally from Renfrew, Bro. MacLean’s work took him to Lochgilphead back in the 70`s. While there he joined Lodge Loch Fyne No. 754 where he was Initiated and Passed. However, circumstances and further relocations meant that he was never Raised.

In September last year he was in Erskine Homes for some respite care and although not well enough to attend the Annual Meeting in the Homes as organised by The Lodge of Erskine No.1566, it rekindled his interest in the Craft and, through his family, he asked if he could, after some 40 years, be Raised to the MM Degree.

Bro. Maclean does not enjoy good health and after discussions between Lodge Loch Fyne No.754 in the Province of Argyll & the Isles and Lodge Prince of Wales, Renfrew, No.426 in the Province of Renfrewshire East, it was agreed that 426 would raise Bro. MacLean as a “favour” to 754

Bro. MacLean is presented with his MM Certificate by the RWM of Lodge Prince of Wales Bro. Ron Alexander along with other members of the Lodge.

So on Saturday 19th March at a Special Meeting held in Lodge Prince of Wales , Bro. MacLean was Raised by the Degree Team in a suitably adjusted MM Ceremonial.

This ceremony was attended by the PGM of Renfrewshire East, Bro. John S. Miller and other Commissioned Office Bearers of PGLRE.

PGM Bro. John S. Miller said later: “With the co-operation of the Province of Argyll & the Isles we were delighted to help out in this way; It seems Bro. MacLean’s renewed interest in Freemasonry was sparked off by the annual meeting that The Lodge of Erskine No.1566 holds at the Homes.

“The MM Degree was exceptionally well delivered by the Brethren of Lodge Prince of Wales No. 426 in circumstances which were unusual but thoroughly appropriate in the circumstances.”