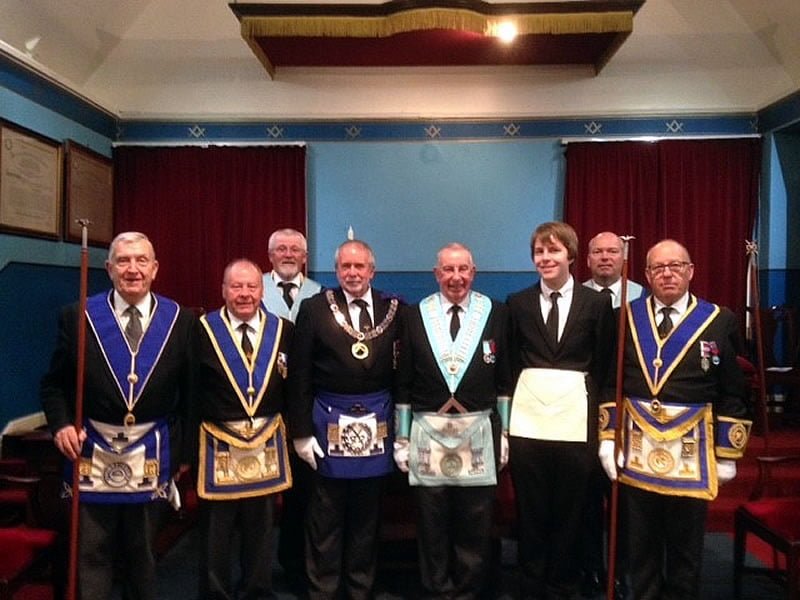 On Saturday 3rd September, the Worshipful Master of Brigantes Lodge, Bro. Ralph Hutchings, led his team of officers in the ceremony of initiation. The candidate was the 26 years old Martin James Hepworth.

The preamble to this initiation was somewhat unusual, in that Martin was not known to any of the members of the lodge. He had held a long standing ambition to become a mason and had made his contact with the then secretary of Brigantes Lodge having found the contact details on the Cumberland and Westmorland Provincial website.

It was, of course necessary for the lodge to get to know Martin, so arrangements were made for him to attend lodge and chapter after proceedings. He soon made friends with the brethren and their ladies and it was decided that W. Bros. Bob Erett and Ross Procter would propose and second him.

In March, a ballot proved in favour of his admission into Brigantes Lodge and the arrangements commenced.

Our visitors included the annual deputation from Lodge Mother Kilwinning No. 0 (S.C.), The Mother Lodge of Scotland. After the ceremony, Brother David Charles Bloomfield, PPrGM of the Province of Kilwinning, brought greetings from the Mother Lodge and had this to say, “I have seen many First Degree ceremonies, but I have never seen a better one at any time, anywhere.” The other visitors were all equally impressed with the standard of working and the brethren who took part in the ceremony were delighted with their comments.

At the festive board, following the meeting, we were joined by the ladies and a good evening was had by all. Two raffles took place, one raising £326.00 for the Kendal Masonic Hall Roof Restoration Fund and a Chorley raffle raised the sum of £244.00 to go to the lodge banner fund.

In the meantime, the Worshipful Master and his team at Brigantes Lodge must keep their eyes on the ball, they have another candidate for initiation at the next regular meeting in December.