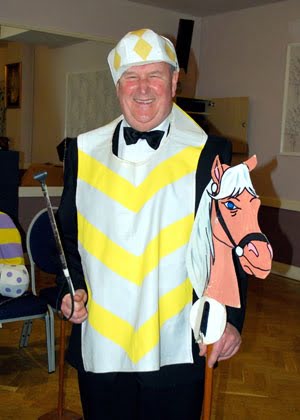 The fundraising event organised by Bootle Group’s Friends of the Hall (Froth), which was again held in the dining room at Litherland Masonic Hall, was their Annual Race Night, this is usually held around the same time of the year as the Grand National and was their 9th.

Don Fraser of Eureka Lodge No 3763 dressed in race attire.

Froth was originally set up within the group to help bring the lodges, chapters and other degrees together, to partly enjoy each other’s company in social activities and with a common cause, that being for the welfare of the group, raising funds to help towards their Masonic home. Over the years Froth has helped support the group with contributions towards the cost of the furniture and decoration of the hall, to name a few.

The evening was very well attended by the members and guests of Bootle Group, with the dining room set up with a race track in the centre of the room. The track consisted of a large roll of artificial grass with a number of white lines painted on it. Homemade hobby horses were used on the night with volunteer jockeys recruited from the race goers.

Over the couple of months before the night, the members of the Froth committee and the reps have been raising money for the evening by handing out sponsor forms amongst the group, where members were able to purchase an imaginary horse and name it, for inclusion in the races on the night. The horses were then drawn into the various races, with six races being run in total on the evening.

Froth Chairman Graham Chambers of Crosby Lodge No 3714 welcomed everybody to the evening before explaining how the race night worked, prior to the start of the first race of the evening.

After the third race there was an interval and owners, jockeys and punters enjoyed an excellent buffet, whilst the raffle tickets and the card for the Irish bingo were sold.

Once the dining had finished, the Irish bingo was held before the final three races ran. The raffle raised £148 and the Irish bingo raised £27 towards the overall total for the evening.

Graham gave thanks to everyone for supporting the event and for the help with the buffet. He also thanked Ian Gee for all the support and hard work he has devoted to Froth over the years, especially as the group chairman.

Graham then asked Ian if he would draw the tickets for the evening’s raffle. Once the raffle was finished Ian said: “I am delighted to see so many people have come out tonight to support Froth.” He gave special thanks to Anne and Shelia Chambers for their hard work on the evening. Ian then thanked Graham for all his hard work and the time he has devoted, in helping to raise money for Froth.

At the end of the evening Graham announced that the event had helped to raise £1,104, which will go towards supporting the various needs for the hall, He also announced that the next Froth event will be the Cabaret and Dinner Dance on 4 June at West Lancashire Golf Club and concluded by wishing everyone a safe journey home.

Tasters of the race night.