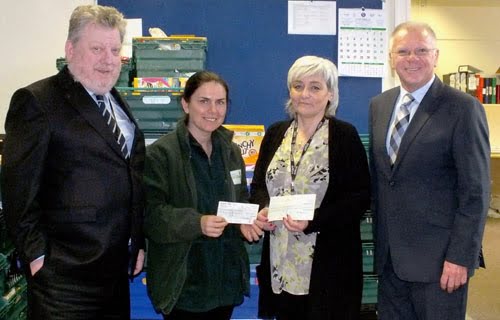 The brethren and their wives within the Bootle Group have for the last four years been raising funds and donations in support for their Food Bank Appeal, with an annual donation each year of either food or money being donated to a local food bank.

This year the group has been joined by the Freemasons Grand Charity to make a total donation of £620 to St Leonard’s Youth and Community Centre Food Bank, where this donation will go to help the local community. The group’s food bank appeal was initially set up by the Bootle Group Chairman Ian Gee.

A small delegation of the brethren and their wives attended a presentation at Waterloo Town Hall, Liverpool at the St Leonard’s Food Bank collection place. Leading the delegation was Assistant Provincial Grand Master Derek Parkinson and Ian Gee, who were warmly welcomed by the Food Bank Manager Debbie Shelley and Food Bank Co-ordinator Gayle Connor-McCareith.

The presentation commenced with Derek, who on behalf of The Freemason’s Grand Charity presented Debbie with a cheque for £200; Derek said: “We are delighted to be able to show our support for St Leonard’s Youth and Community Centre Food Bank. Charitable giving is central to Freemasonry and West Lancashire Freemasons are especially happy to support organisations that give back to our local community. The Freemasons’ Grand Charity works on behalf of all Freemasons in England and Wales, donating £1,000,000s to worthy causes every year and we are happy they have joined with us this time to support St Leonard’s Youth and Community Centre Food Bank.”

Ian then presented Debbie with another cheque on behalf of the Bootle Group for £420. This amount was raised by donations from within the group of £200 and a donation by Crosby Lodge No 3714 of £220.

Debbie thanked Derek and Ian for the kind hearted donations received from the Freemason’s Grand Charity and again for another donation by the Bootle Group. She went on to say that food banks help people where a sudden crisis has arisen, for example, loss of work, redundancy, accident or illness, which has left them without any form of income and unable to buy food.

Derek Parkinson presenting the cheque from The Freemasons’ Grand Charity to Debbie Shelley with the delegation.

It is much needed not only for the food but essentials such as nappies, soap and ladies toiletries. Some of the beneficiaries are very reluctant to ask for help and not just people being unemployed, but also that people struggling on low incomes will benefit with the food the group has given and it will go a long way in supporting the food bank and its cause.

St Leonard’s Youth and Community Centre has been selected as the Food Bank covering the South Sefton and Crosby area of the local council. All the food that has been given out to the local community has been donated by various charities or organisations. Before the food is given out it is sorted by its volunteers, with its best before date and to its type, before being packed into boxes ready for use. This is then distributed to the food bank centres within the area, where it is made up into various food parcels before being given out to their clients.

Front line professionals such as social workers, GP practices and walk-in centres are issued vouchers for those people who they think are in need. The vouchers can then be exchanged for three days’ supply of food until such time that the recipients are able to return to an income or receive a benefit payment.

Every year The Freemasons’ Grand Charity donates over £7,000,000 to charitable projects and services across England and Wales.

Ian Gee presenting the cheque from the Bootle Group to Debbie Shelley.