Most Shropshire folk will undoubtedly be familiar with the Lingen Davies Cancer Fund (renamed from the Lingen Davies Cancer Relief Fund in 2013). Bernard Lingen, as Mayor of Shrewsbury in 1979, togetherwith local accountant, Frank Davies, launched the Cobalt Unit Trust Fund to raise funds to build and equip a new Radiotherapy Department at the Royal Shrewsbury Hospital, so that people with cancer in Shropshire and Mid Wales could receive their treatment and care locally. Their initiative was hugely successful with the ‘The Cobalt Unit & Cancer Ward (Radiotherapy Department)’ opening its doors in 1982.

What few Shropshire people will know is that both Bernard Lingen and Frank Davies were Past Masters of Pengwerne Lodge No 3229. Their vision and foresight laid the foundations for an amazing succession of associated charity appeals, which the people of Shropshire, Mid-Wales and beyond have taken to their hearts, helping to fund an astonishing number of projects:

With no fewer than eight current members of the Lodge having good reason to be grateful for the treatment, care and support they have received at the Lingen Davies Day Centre, all the Brethren of Pengwerne Lodge rolled up their fundraising sleeves! In October, Members approved a £500 donation – then happily boosted by a £500 match-funding grant from the Shropshire Masonic Charitable Association to make £1,000. November’s Ladies Night, held at the Lord Hill, attracted over 100 diners who generously supported the raffle, the £480 proceeds of which had been pledged by the then Worshipful Master Tom Fulton and his lady, Ann, to be added to the LDCF donation. The Lodge’s general fundraising fund was also augmented in fine style by the auction proceeds of £520, lots for which were:-

Although not intended as a fundraising event, under the stewardship of enthusiastic Wardens, Simon Baugh and Chris Lewis, the evening realised over £1300 for charity and everyone enjoyed an outstanding social evening.

As a final fundraising effort towards the Lingen Davies donation, the Brethren of Pengwerne Lodge were invited to make personal donations, which turned the £1480 so far raised to the marvellous figure of £2000. The Brethren receiving treatment made up the bulk of this figure, a great deal of it anonymous. 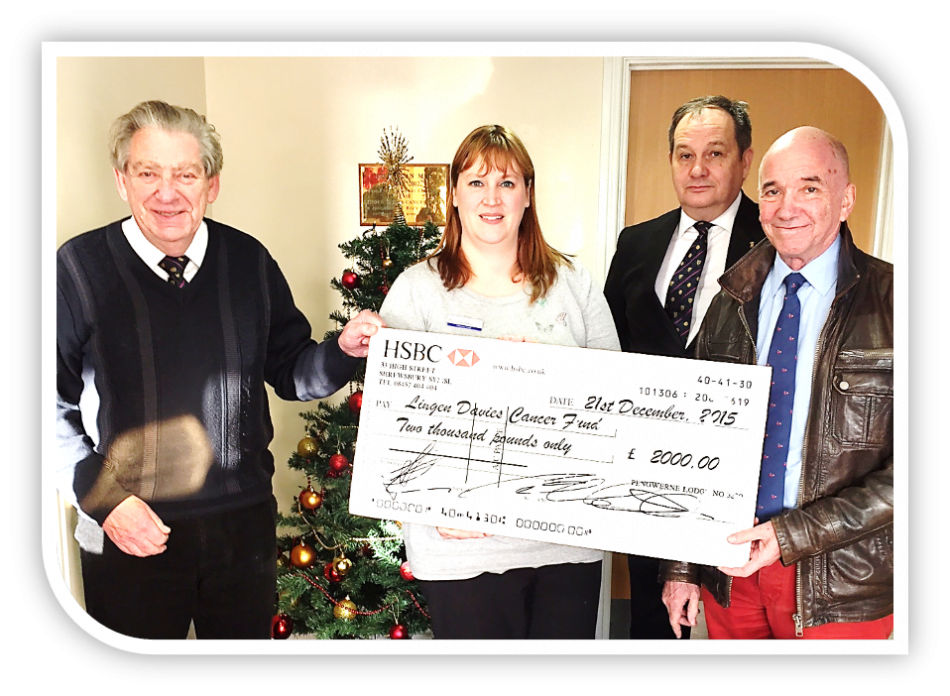 Thanks to its 2015 fundraising industry, the Lodge not only presented this cheque for £2,000 to the Lingen Davies Cancer Fund, on Monday 21st December, but also donated £3,800 to the Freemasons’ Grand Charity via the 2019 Festival Appeal, thereby attaining 102% of the Lodge’s pledged total. No doubt, 2015 was a truly outstanding year for Pengwerne Lodge, its 63 Members and most importantly of all, for charity!

As Freemasons, we know that the actions of a ‘few’ can often benefit ‘the many’. Through realising their shared vision, the late Bernard Lingen and Frank Davies have brought cancer treatment, care and extended life to many thousands of people in Shropshire and Mid-Wales; people who might otherwise have had to make journeys, sometimes daily, to more remote treatment centres, with the added stress that would have entailed. It underpins just how Freemasonry can, and does, make a difference in an increasingly challenged world, usually unheralded and unpublicised. Long may it continue!

Well done Brethren of Pengwerne Lodge – wonder what you will get up to in 2016?

The post Boost for local Cancer Charity set up by two Freemasons appeared first on shropshiremasons.