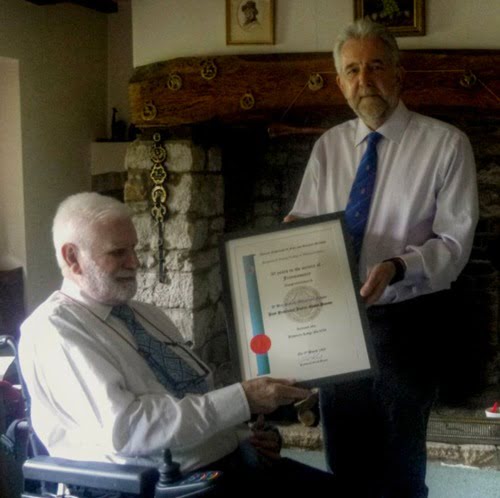 On Saturday 15th July, the Lodge Mentor of Boldmere Lodge No 4704, W Bro Graham C Holt accompanied by the Lodge Secretary, W Bro Dennis R Trent, travelled to the village of Woolminstone in Somerset to the home of W Bro Donald Fraser, an Honorary Member of the Lodge, to present him with his 50 year certificate in Freemasonry, on behalf of The RW Provincial Grand Master, W Bro David F Macey.

W Bro Don, who is now wheel chair bound after suffering a stroke several years ago, had been unable to attend the March meeting to celebrate his 50 years service and Boldmere Lodge had sought permission from the Provincial Grand Secretary to complete the certificate presentation by means of a home visit.

Don was initiated into Boldmere Lodge in 1967 and after just a few years membership he moved to Nigeria with his business. Upon his returning to Sutton Coldfield, he quickly became an active member once again, and subsequently was elected as Worshipful Master in 1985. He continued his very active participation as a Past Master and became a Preceptor and later Director of Ceremonies during the late 80s until his retirement in 1992. It was then that he moved to his delightful cottage in the tiny village of Woolminstone, near Crewkerne with his wife Irene who sadly has since passed to the Grand Lodge above; Don continued to make the long trip back to Boldmere on a regular basis until the journey became too arduous and, eventually, he was elected an Honorary Member for his services.

W Bro Don has retained his endearing sense of humour despite his mobility problems; he proved to be the perfect host during the visit and his sense of pride in showing us around his beautiful and extensive garden was very evident. With the help of some photographs and other Lodge memorabilia which we had taken with us, Don took great delight in remembering members, both present and past during our almost three hours spent with him.

It was, indeed, a great honour and privilge to conclude the afternoon by presenting W Bro Don with his 50 year certificate, on behalf of The RW Provincial Grand Master, and send him the greetings, and congratulations, of fellow Warwickshire masons.