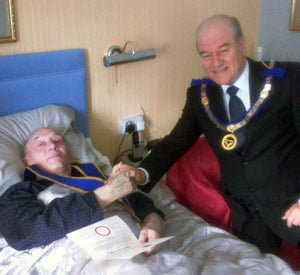 Such has been the contribution to both Sincerity Lodge No 3677 and Freemasonry in general by William (Bill) Woodhead, that in January of this year he received a letter that he was to be appointed to Provincial Grand Lodge to the very high rank of PPrJGD.

Bill with his collar and patent being congratulated by Tony.

This came as a great surprise, especially as it was such a high rank for a first appointment and the fact that Bill has never been through the WM’s chair of his lodge.

However, anyone who is aware of Bill’s considerable service and dedication over the 46 years since his initiation would not be in the slightest surprised. Bill has served the lodge loyally over the years as secretary, treasurer and also organist.

Sadly, Bill was admitted to hospital early in April and due to his illness it became obvious that he would be unable to attend Provincial Grand Lodge in May. He has since discharged himself so he can be at home with his long term companion Marion and his daughter Lynn.

As a consequence APrGM Tony Bent decided to take Provincial Grand Lodge to Bill’s home in Wigan where he had the great pleasure in investing him with his collar and presenting him with his pattern of appointment. 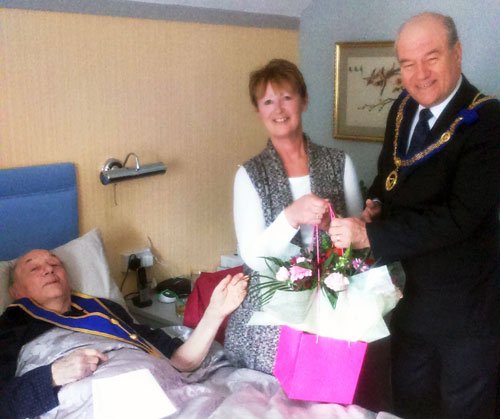 Bill was delighted to receive Tony and was really pleased to receive his honours. Bill’s daughter Lynn was also delighted for her father and grateful to Tony for his thoughtfulness in taking the time to come and make the presentation and to thank him for his time she presented him with a bouquet of flowers to take home for his wife Linda.

This was a wonderful occasion allowing a fine man and Mason to receive the honours he so justly deserves.