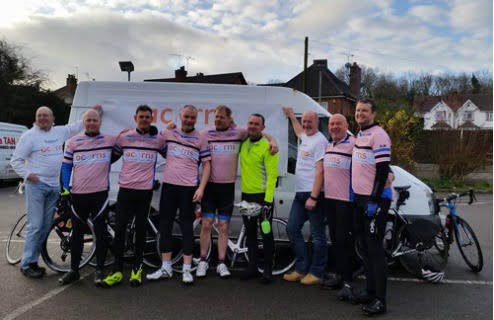 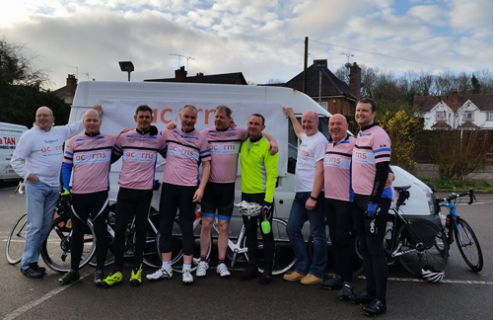 The 7 cyclists and 2 support drivers faced a 450 mile journey over 4 days, leaving Redditch Rugby Club at 8.00am on Friday 8th April and arriving in Dam Square, Amsterdam at 5.30pm on Monday 11th.

Fairly uneventful day with the exception of an early set back due to one bag, complete with passport and money, not being loaded into the van causing an unscheduled stop after only 5 miles. The weather was good with no rain and not too hot. The day ended with a meal and a couple of beers to celebrate Dan’s 40th birthday in The Wooden Bridge, Guildford.

An early start at 6.30am, with a ferry to catch and the weather turning the cyclists knew it was not going to be easy. Having braved all sorts of weather from glimpses of sunshine to sleet and all things in between with the addition of almost gale force winds on the south coast, plus several punctures the team arrived at Dover with borderline hypothermia, uncontrollable shivering and inability to talk properly. After changing on the roadside, loading the bikes into the van and boarding the ferry spirits rose with the prospect of better things to come. However the drama was not over, cyclists taking a wrong turn out of port at Calais turning a 10min walk into 1 ½ hours and it was raining, again.

After a night in possibly the smallest hotel room for 3 the first thing to be done was some much needed maintenance on the bikes, cleaning and re-greasing etc. Blue cloudless skies promised a good day ahead. Terrain was flat, cycle tracks well signposted and generally dead straight along canals, the only drawback was the headwind, but with no deadlines to meet there was time for rest stops in some of the picturesque towns of Northern France and Belgium. Arrived in Vlissingen and after storing the bikes and freshening up it was time for a Pizza and beers at Lungo Mare.

First part of the ride was along the coast exposed to brutal winds whipping sand across the track keeping the pace down, but once away from coast with a bit of shelter, spirits rose again as the finish got ever closer. Last stop, by another canal saw the cyclists in good mood with only 30 miles to go. After the nightmare of trying to park a transit van in a city dominated by bikes, the drivers made their way to Dam Square to await the arrival of the cyclists. On their arrival, amidst the hundreds of bikes in the square, celebratory pictures were taken and then celebratory beers drunk. With the words “Never again! Well maybe “ being muttered all round. 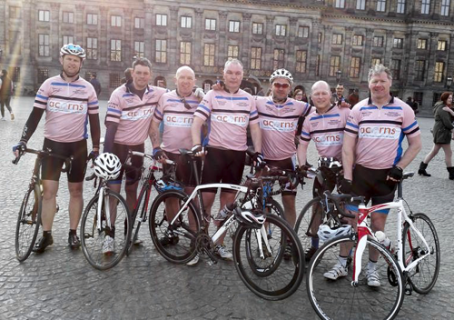 With the money still coming in the original target of £3000 has been exceeded but any donations would be welcome. The just giving page is still open for donations to this worthy cause. https://www.justgiving.com/fundraising/Redditch-RFC