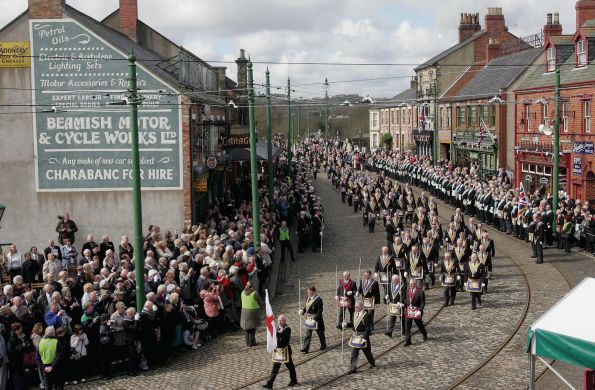 Beamish Living Museum is a triumph in preserving the history of bygone times, for when the foundation stone for the new Masonic Hall in Park Terrace, Sunderland was laid with full Masonic honours in 1869, the Freemasons present on that day could never have envisaged that history would repeat itself some 137 years later, and that their building would be re-erected as a tribute to the design and to the lasting qualities of the Masonic movement.

It has took eight years of partnership, research and co-operation between the Provincial Grand Lodge of Durham and Beamish Museum, the re-erected Masonic Hall opened its doors once again, this time not limited to Freemasons, but to provide an insight into Freemasonry for the 350,000 visitors who flock to Beamish every year.

The official opening of the Hall took place in April 2006 with all the splendour of a Masonic procession of 300 Masons in full regalia, led by a marching band down the 1913 cobbled street decked out with flags and lined with Masons, their families and many visitors to the Museum.

At the rear of the procession followed a carriage drawn by four magnificent horses, driven by the Lord Lieutenant of Durham, Sir Paul Nicholson, which drew murmurs of admiration from the 2,000 assembled Masons and invited guests gathered in the street.

The occupants of the carriage were the Grand Master, HRH the Duke of Kent, the Provincial Grand Master of Durham, Dr Alan Martin Davison and the Director of Beamish, Miriam Harte and other members of the retinue.

Eight Years in the Making

The opening of the Masonic Hall at Beamish, The North of England Open Air Museum in April 2006 was the culmination of a project that began in 1988. Beamish is an open-air museum set in a 300-acre site in the north east of England, between Durham and Newcastle. Threatened significant buildings from around the region have been physically moved to the museum and set in the landscape. They are interpreted by people in costume; the buildings are set in 1913 or 1825 depending on the area in which they are located.

The purpose of the museum is to preserve the history of the North East. The Masonic Hall provides an insight into the changing world of freemasonry. Set in 1913 the building, with its costumed interpreters, allows members of the public to explore Edwardian freemasonry at their own pace. At that time the institution was much more public, visible and thriving than it is today.

Footnote
The overall cost of the Project was £1.2m, of which Durham Freemasons Millennium project donated £500,000. In addition, the Province of Durham has loaned a large proportion of the items on display from its own Museum surplus stock, many of which came from the original building in Park Terrace.