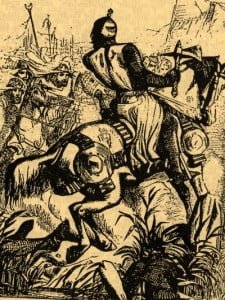 The following article, part one in a series on Templar Battles, is adopted from Stephen Dafoe’s book Nobly Born: An Illustrated History of the Knights Templar, published by Lewis Masonic.

A year before the Christian loss of Jerusalem in 1187, there was a difference of opinion between the Knights Templar and Hospitallers over who should rule the kingdom after the death of King Baldwin V. The Templars believed that the crown should rest on the head of Baldwin’s mother Sibylla and her new husband Guy of Lusignan, while the Hospitallers favoured Raymond III of Tripoli, who had been regent for the leper King Baldwin IV, a man who despite his frailties had been victorious at the Battle of Montgisard in 1177.

Since the early days of the Military Orders, the Grand Masters held a special place in the Haute Cour of Jerusalem, literally holding the keys to the kingdom. There were three keys to the box that held the crown jewels. The Patriarch of Jerusalem and the Templar Grand Master Gerard de Ridefort, both of whom supported Sibylla, each held one key, while the third was held by the Hospitallers Roger des Moulins, who supported Raymond of Tripoli in his rightful duty. When it was time for Sibylla to be crowned Queen of Jerusalem, the Hospitaller Grand Master initially refused to turn over the key, but finally threw it from his window into the dirt below, disgusted by the whole affair. De Ridefort eagerly snatched the key from the dirt, seeing it not so much as the key to unlocking the crown jewels as it was the key to unlocking his revenge on Raymond of Tripoli for having refused him a bride in the years before he had joined the Templar Order. As the Templars guarded the city gates to keep Count Raymond out, Sibylla was crowned Queen of Jerusalem by the Patriarch of Jerusalem. She, in turn, crowned Guy as her king.

Throughout the winter of 1186 the Templar Master lobbied the new and malleable king to march on Raymond and take Tiberius away from him in order to bring him back into the fold. In a countermeasure, Raymond entered into a truce with Saladin to protect Tripoli and Galilee from just such an attack. King Guy, who tended to take whatever council was offered him at any given moment, may have actually taken de Ridefort’s advice had not Balian d’Ibelin convinced him to take wiser council. Instead of marching on Tiberius with arms, it was decided to march with diplomats and on 29 April, 1187 the archbishop of Tyre together with Roger de Moulins and Gerard de Ridefort set out for Tiberius. The plan was to pick up de Ibelin at his castle at Nablus. But the younger de Ibelin brother was tied up and sent the party north, promising to meet up with them at the Templars’s castle at La Féve.

As the Christian embassy’s moved northward, Saladin’s son al-Afdel requested Raymond to allow a scouting party from his army to move south. The request was little more than a polite formality because the truce Raymond had signed with Saladin allowed for it. However, it did not prohibit the count from warning his co-religionist’s embassy. But what should have been a well-heeded friendly warning soon turned to unnecessary bloodshed. Upon receiving word that Muslims were afoot, de Ridefort moved immediately into action by summoning as many of his Templars as he could quickly gather.

On May 1, the army made up of about 90 knights from the two Orders, another 40 local knights, 300 foot soldiers and the two Grand Masters arrived at the Springs of Cresson, north of Nazareth. Below was an army of approximately 700 Muslims, although contemporary accounts number them at 7,000. Being greatly outnumbered des Moulins and the Templar Marshal James de Mailly urged de Ridefort to retreat; however, the Templar Master would have no part of it. Instead of taking his Marshal’s council, he taunted the man, telling him that he was too fond of his own blonde head to risk losing it. The Marshal responded that he would die in battle a brave man, while his master would flee the field of battle like a traitor. It was a prophecy that would come true sooner than de Mailly would hope. Gerard, insulted by the insubordinate comments of his Marshal, spurred his horse at once and led the charge down into the valley where the Muslims were waiting. When the battle was over, both the Marshal of the Templars and the Master of the Hospitallers, who had urged de Ridefort to retreat, lay dead in the field. Roger de Moulins took a lance to the chest. Alongside their corpses were the bodies of the knights and 300 sergeants who had entered the battle. Of those who had entered the field, only four men survived, one of whom was de Ridefort himself.

The massacre at Cresson was undoubtedly a disaster brought on by de Ridefort’s impetuous nature and, although the Templar Master was responsible for sending 90 of his men to their deaths, those men lived on in legend and lore for many years, as subsequent Templar leaders used their martyrdom to maintain morale among troops before a battle or during a siege.

The ancillary benefit of their martyrdom was the unification of the two political factions. It had been Raymond who allowed the Muslims to cross his land in the first place and part of the blame lay at his doorstep. Shortly after the massacre at Cresson, Raymond and King Guy patched things up, the truce with Saladin was ended, and the Muslim garrison stationed at Tiberius was expelled. For the first time in many years, it seemed like Christendom was once again prepared to turn their attentions towards a common enemy and Guy was able to assemble an army from Tripoli, Antioch and his own Kingdom of Jerusalem the likes of which had never been seen.

Unfortunately, it would prove to be too little too late. The Battle of Hattin was just around the corner, and following its disastrous conclusion, Jerusalem would once again be in Muslim hands.